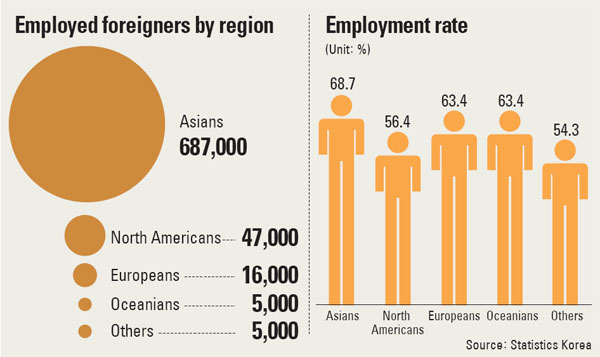 The number of employed foreigners in Korea fell 31,000 to 760,000 in the year ending May 31, down 3.9 percent, Statistics Korea announced yesterday.

According to the government agency’s second report on foreign residents, the total number of foreigners older than 15 is 1.12 million, up 1.1 percent from a year earlier. The rate of employment to the population of foreigners declined 3.5 percentage points to 67.5 percent.

The main reason for the decline was attributed to expired visas for a majority of foreign workers. The visas were effective for a maximum of four years and 10 months.

The number of foreigners with E-9 visas dropped 12,000 year-on-year. The E-9 visa is issued to those legally qualified to work in Korea, but who are not specialists or professionals. Holders of the visa usually work in the manufacturing, construction, service and agricultural sectors.

The Ministry of Employment and Labor adopted a system to allow Korean expatriates living in China and other developing countries to enter the country in 2007. They were given H-2 visas for three years, which can be extended by 22 months.

These two groups accounted for the largest portion of foreign workers. The Employment Ministry sets the maximum number of foreigners eligible for these visas every year.

“As the expiration dates of H-2 visas issued in 2007 expired, the number of departing foreigners exceeded that of new entrants,” said Gong Mi-sook, director at the agency.

Meanwhile, the population of non-working foreigners stood at 333,000, up 14.8 percent from last year. About 40 percent said they quit work due to household chores and child care. Roughly 26 percent said they just took a break.

“A noticeable difference from statistics on Koreans is that foreigners tend to be less willing to work,” Gong said. “But the figure for the non-working population doesn’t refer to workers who have given up finding jobs. We found that they just want rest for some time.”

She added the agency decided to conduct the annual survey in May instead of in June like it did last year because many foreigners leave for vacations in that month, making statistics less accurate.

The decreased number of workers was demonstrated in major industrial sectors like construction (minus 21,000), retailers and restaurants (minus 12,000), and agricultural and fisheries (minus 8,000).