Taeyang’s new single is out

Taeyang’s new single is out 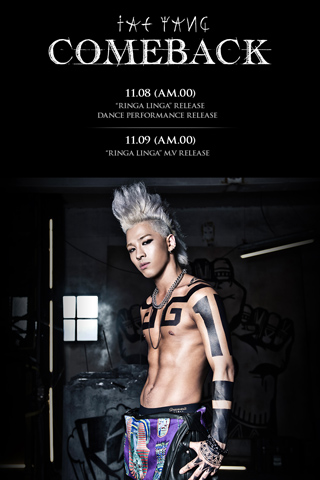 Taeyang released the song “Ringa Linga” early this morning, as part of his first solo venture into the music scene in three years.

A final teaser image for the album was released yesterday through the official blog of his agency, YG Entertainment. In the image, Taeyang shows off his masculine side, posing shirtless, showing off a necklace and elaborate tattoos. His hair has an unusual silver and white style and his eyes are darkened with eyeliner.

He also released a dance performance to the new song “Ringa Linga” yesterday, while his music video is to come at midnight today. It is rare for an artist to release a video of themselves dancing to the song first, followed by a music video.

“It is said that [Taeyang] gathered talented dancers from across the United States to film the dance video,” said an official at YG Entertainment.

The singer will make his first live performance of “Ringa Linga” on the SBS music program “Popular Song” on Sunday.