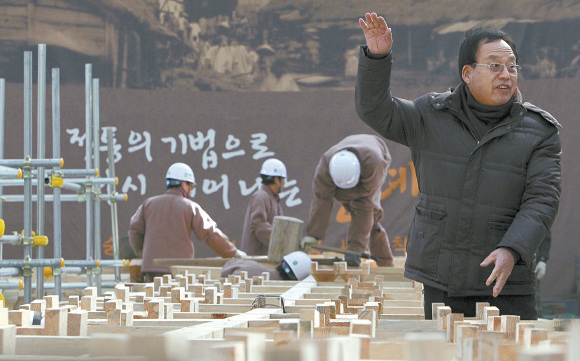 Sin Eung-soo, the chief carpenter who oversaw the wood reconstruction of Sungnyemun, says that the Cultural Heritage Administration appointed him to the position too late, which gave him too little time to carefully select the right wood for the process. [JoongAng Ilbo]

Sin Eung-soo, the 71-year-old chief carpenter and Intangible Cultural Heritage No. 74 who was in charge of the restoration of Sungnyemun, started his career in carpentry at the age of 17.

He was in charge of the repair and restoration of some of the most important wooden structures in Korea, such as Changgyeong Palace and Gyeongbok Palace.

“The biggest problem was that we didn’t take enough time, and we didn’t use carefully-selected wood,” Sin told the JoongAng Ilbo on Tuesday.

A. The Cultural Heritage Administration failed to appoint the person in charge of the wood on the field in time. Much time was needed for the CHA and the person to discuss and select the type of wood to be used at the reconstruction. I was appointed as that person only two years after the arson. By then, the CHA had already decided what type of wood would be supplied. I actually fought with the CHA all throughout the process because of the wood. However, clearly there were limitations in terms of time and materials. As reported in the media, many individuals and private entities also donated wood, many of which was of bad quality. We picked the best wood of the available ones.

What part of the wood was a problem?

In principle, we used the wood left from the burned Sungnyemun as much as possible. For the first floor, which suffered less damage compared to the second floor, 90 percent of it used the old wood from the original gate [before the arson]. However, for the second floor, we mostly used new wood. That is why we are seeing cracks and distortion, in particular in the joints. The pillar on the second floor is from pine trees from Samcheok, Gangwon. It was a mistake to have missed seeing a knot where the resin was crumpled. I wanted to check every single piece of wood that went into the restoration with my own eyes but couldn’t, as the CHA kept postponing the process, citing a parliamentary hearing.

Critics are saying the wood is not dried completely.

It takes seven to 10 years to completely dry the wood. We couldn’t wait that long. We had to use whatever [wood] was given. I didn’t even get to know the percentage of moisture content. In order to opt for the traditional method 100 percent, it takes a lot of time and money. In 1962, we actually did. But this time around, the time and money was half of that. It just simply couldn’t be a good restoration. The problems of wages occurred also because of that. It’s because the CHA’s initial budget for the restoration was cut down later.

As promised by Byun Young-sup, the head of the Cultural Heritage Administration, the CHA formed a special investigative body that consisted of 23 experts and held a meeting to discuss the situation.

Yesterday, the CHA released a press statement, saying that it will look into the claims raised by the media.