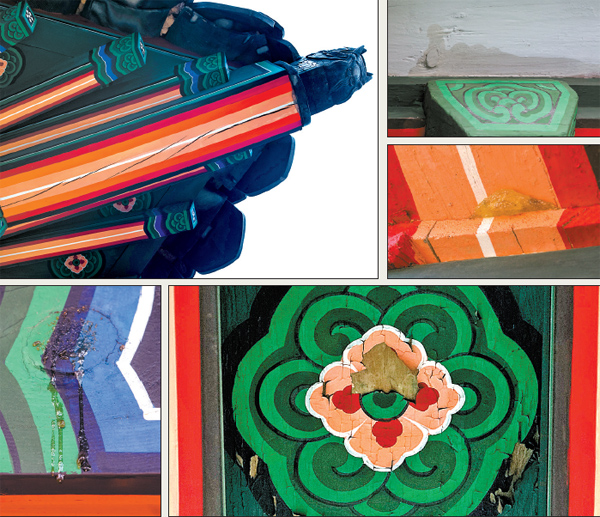 Sungnyemun, the 600-year-old wooden gate in Seoul, has peeling paint as well as cracks here and there. In recent weeks, experts raised concerns about cosmetic damage to the country’s National Treasure No. 1, but a JoongAng Ilbo investigation found that the damage is far more significant than initially thought. The investigation also found that the Cultural Heritage Administration allocated just a small part of its budget to buying materials, which led the officials to opt for unqualified, cheap materials not suitable for the restoration of a state treasure. The gate was burned down in February 2008 in an arson attack and underwent a five-year-long high-profile and costly restoration. [JoongAng Ilbo]

Many would agree that Sungnyemun, Korea’s National Treasure No. 1, is the face of Korea and dear to the hearts of Koreans.

That is why when it was destroyed in an arson attack in February 2008, some people were moved to tears. And the restoration that ensued was closely followed by the media.

Recently, Koreans were disheartened once again as news surfaced that the 600-year-old gate has not been restored properly, displaying cracks, exfoliation and discoloring on the dancheong (traditional color decorations for Korean wooden structures), which is supposed to be one of the jewels of the state treasure, just five months after the high-profile, extremely costly restoration process.

However, adding to the disappointment, a JoongAng Ilbo investigation has discovered that the restoration of Sungnyemun was full of irregularities, meaning the recently-found damage was a foreseeable disaster.

The state-run Cultural Heritage Administration (CHA), which was in charge of the process, bought unqualified, cheap materials; the damage wasn’t done only on the dancheong as reported earlier, but also on wood, meaning that the damage wasn’t just cosmetic but structural; they paid workers less than the government-designated rate; and they used machines, even though the government said it used only traditional methods.

Looking at the budget data for the restoration, of which the JoongAng Ilbo received an exclusive glimpse, such irregularities were inevitable given the money allocated.

The CHA appears to have not been completely honest about traditional paints. The JoongAng Ilbo has found that they used 10 different types of paints called sugan, that is made by dyeing powders of shells with chemical substances. The CHA had said that it took the opportunity to restore the production of traditional paints.

“We were told initially that the CHA would spend 500 [million won] to 600 million won for traditional paints, but one day we were notified to supply sugan paints,” said Kim Hyeong-seung, the president of Kailart, which supplied paints for the restoration. 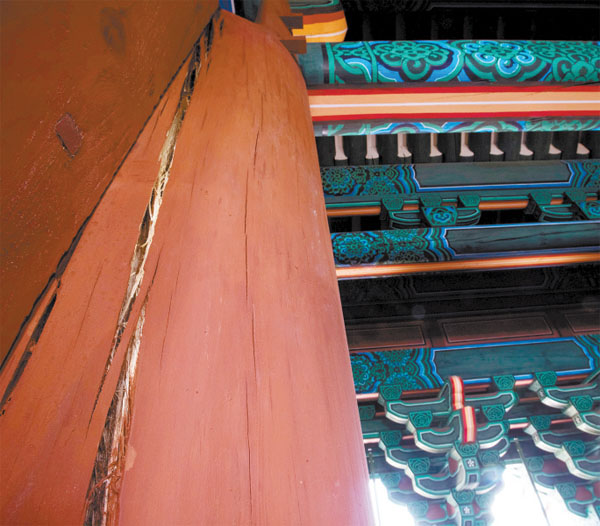 A pillar on the second floor of Sungnyemun displays a conspicuous crack measuring about 1 meter (3.2 feet) high. Experts say the damage that occurred five months after the restoration shows that the wood wasn’t dried properly. By Park Jong-keun

When asked about this, the CHA gave an inadequate explanation that “all purchases of materials were conducted within the designated government rate.”

Looking further in the budget data for the restoration, the CHA appears to have used a lot of money on public relations: Officials spent about 2.4 billion won - about twice the amount of money spent on buying materials - on holding ceremonies, making PR videos, building an exhibition hall and having “operation management.”

The JoongAng Ilbo examined the wood of the newly-restored Sungnyemun last week and found significant damage.

On the second floor - which suffered the biggest damage in the arson and thus is where most of the new wood is concentrated - one of the four main pillars already had a wide and deep vertical crack, conspicuously showing the inside of the wood. 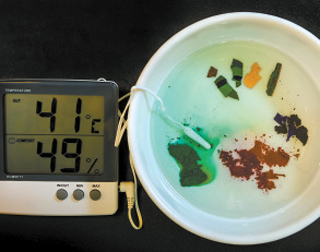 Our experiment revealed that pieces with traditional coloring from Sungnyemun, top, don’t dissolve in hot water, whereas other pieces, bottom, do. Experts say if authentic traditional adhesive was used to attach the colors onto the surface, the colors should dissolve at temperatures between 50 and 70 degrees Celsius. [JoongAng Ilbo]

The wood is a type of rare pine tree and comes from Samcheok, Gangwon, which is an area that used to provide wood for constructions of major buildings during the Joseon Dynasty (1392-1910). Cracks were also evident on parts of rafters and protruding corners of eaves.

One wood expert who wished to remain anonymous told us that “it appears to be because they used wood that wasn’t fully dried,” adding that the crack will worsen.

Sin Eung-soo, the chief carpenter and Intangible Cultural Heritage No. 74 who was in charge of the restoration of the gate, admitted that the wood wasn’t dried completely. “The official in charge of the wood on the field wasn’t appointed in time, and thus proper wood wasn’t supplied in time,” he told the JoongAng Ilbo on Tuesday. “I couldn’t inspect the moisture on the wood myself and - even if it wasn’t dried completely - we weren’t in a situation where we could wait.”

The CHA explained that “the percentage of moisture content was 24 percent, which is in line with the standard government specifications.”

However, Choi Won-cheol, a wood expert and the CEO of construction company Chaewurim, said that “even for wooden residences, the percentage of moisture content should be 19 percent or less to prevent cracks and distortion.”

Sin also disclosed that the unit wages paid for carpenters were 100,000 won per person a day, which was lower than the government-designated standard unit wage of 141,000 won, and even that wasn’t paid on time. Sin said that is what led to a month-and-a-half strike during the fall of 2011, adding that the workers still haven’t been fully paid. The CHA is also known to have paid painters less than the government-designated rate.

In order to look into allegations that unqualified, cheap paints and possibly adhesives were used, the JoongAng Ilbo conducted an experiment using a piece of dancheong that Kim Ho-seok, a professor at the Korea National University of Cultural Heritage, picked up in Sungnyemun. 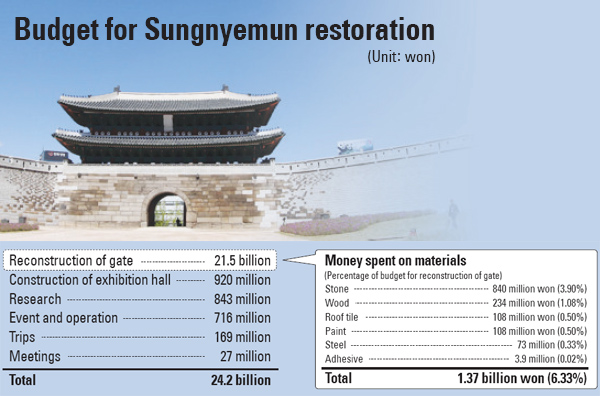 Kim had accompanied the JoongAng Ilbo to an earlier survey of the damage to the dancheong.

We compared the piece to a piece provided by Jo Chun-ja, an artist and expert of traditional coloring. Both of the pieces used agyo, traditional adhesive, to attach traditional pigments to the surfaces of buildings.

The results were shocking.

We put each of the pieces in a bowl of hot water. The piece provided by Jo melted and paint dissolved at 70 degrees Celsius (158 degrees Fahrenheit). But the piece from Sungnyemun remained the same. We boiled the water once again and tried again. But the result were the same.

Experts including Jo raised the possibility that the agyo used was probably not agyo, but just an adhesive. “Any types of agyo would start melting at 50 degrees Celsius and completely melt at 70 degrees Celsius,” Jo said.

So far, critics and media have said that the artisans and officials misused agyo, causing damages to the traditional coloring. But now there is a possibility that they didn’t use traditional adhesives to begin with. Kim of Kailart also said that if real agyo was used, the paint should have dissolved in hot water.

Hong Chang-won, the dancheong master and Korea’s Important Intangible Cultural Heritage No. 48, wasn’t available for comment. In an interview for our previous article, he had said, “I am not an expert [of traditional adhesives], but I used the given product [from the CHA] according to the methods reported to the CHA.”

For the material, the CHA used 3.9 million won. Kim of Kailart said, “there is Makdae agyo, a high-quality agyo, but we were told to supply Al agyo, a cheaper one.”

Koreans used agyo only until the 1960s. Before then, they made agyo using cow’s skin, but after that agyo disappeared due to a lack of demand with modernization and the emergence of modern building materials.

That is why the technique failed to be handed down through generations.

Although the CHA attempted to find out the traditional production of agyo in detail, that attempt clearly wasn’t successful. If done properly, the traditional pigments are supposed to last 100 years, experts say.

When the government completed the restoration in May, it touted how it took the opportunity to transform the gate closer to the way it was during its earlier years.

After all, the gate’s form has changed many times through alterations and damage done during Japanese colonization (1910-45), the 1950-53 Korean War and industrialization and city development projects between the 1970s and 1980s.

Officials also emphasized how the opportunity brought them closer to traditions, saying they hired traditional artisans, used traditional materials and opted for traditional methods for the reconstruction.

On Feb. 10, 2011, the third anniversary of the arson incident, workers wearing hanbok, traditional Korean wardrobe, appeared at the scene and moved stones with a traditional leverage system using ropes and pillars.

It was a meaningful event as it demonstrated the traditional methods workers would have used in the restoration process. Choe Kwang-shik, then head of the CHA, was also there, encouraging the workers.

However, hanbok was just for the day. Cranes replaced the traditional leverage system to move stones and an excavator, not shovels, dug the soil. In other words, the event on that day was just for show.

Lee Jae-sun, a stone expert and Korea’s Important Intangible Cultural Heritage No. 120, said that stonework on the wall on each side of the gate was also done the modern way. “If we do it in the traditional way, workers would have to carry the stone themselves, which was impossible physically, given the time we had.”

The same went for the wood and roof tiles. A CHA official said, “Initially, we were going to ask the workers to manually trim the wood, but we ended up doing the trimming work at a factory.” Sin refuted this, saying that all the work was done manually.

The CHA official said, “According to traditions, the roof tiles are made by mixing clay and sorting out foreign substances manually. But we opted for machines for this process.”

Kim Chang-dae, a roof tile expert and Korea’s Important Intangible Cultural Heritage No. 91, confirmed this, but said all the process afterward was done the traditional way.

Critics say the five-year period for the restoration did not allow for everything to be done the traditional way.

“During the Joseon times, workers waited months and years after the construction of wooden materials for the wood to settle down, and then painted,” one expert said. “For instance, the pillar in Sungnyemun takes seven years to completely dry.”