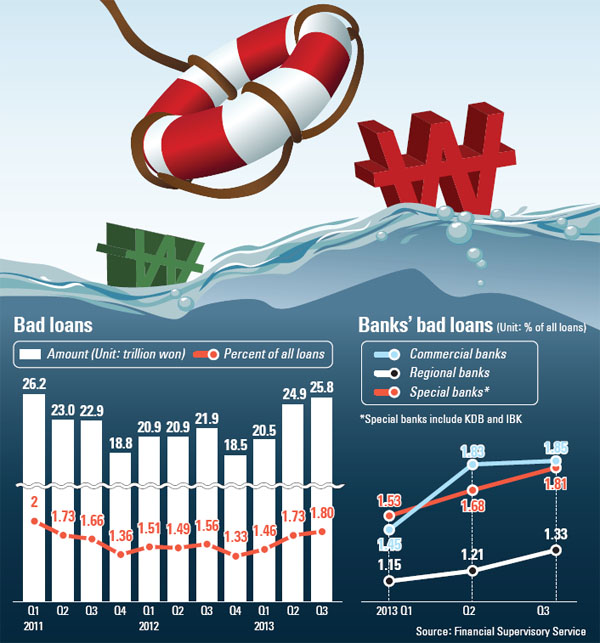 The percentage of non-performing loans at local banks increased for a third consecutive quarter in the July-September period as large companies including affiliates of Tongyang Group and STX Group struggled from liquidity shortages, the country’s financial regulator said yesterday.

The total amount of bad debt - which refers to loans in which interest payments have been overdue for more than 3 months - also reached 25.8 trillion won ($24.3 billion), up 900 billion won from the previous quarter.

According to the Financial Supervisory Service yesterday, the bad loan rate of 18 financial institutions including commercial and regional banks reached 1.8 percent as of the end of September, up 0.07 percentage point compared to June. The percentage is up 0.24 percent from the same period last year. The delinquency rate of commercial loans or loans extended by banks to businesses, including both large and small companies, reached 2.33 percent, up from the previous quarter’s 2.22 percent, while the rate of bad household loans was unchanged from three months ago at 0.74 percent in the cited period.

“New bad loans appeared in the third quarter because of some large companies [that were unable to pay back their interest] like Tongyang Group affiliates,” said an FSS official.

Based on FSS data, the amount of bad loans in the third quarter was 25.8 trillion won, up from the second quarter’s 24.9 trillion won. Of non-performing loans, 22.1 trillion won belonged to commercial loans, accounting for 85.8 percent of total bad loans, followed by household loans (13.5 percent) and credit card loans (0.7 percent).

“Despite the optimistic outlook that the economy is on a recovery track, there are still concerns over the possibility that economy-sensitive businesses in the private sector could go bankrupt,” the official said. “There is a need for financial institutions to beef up their monitoring of asset soundness.”

The percentage of non-performing loans among seven commercial banks was highest at Woori Bank at 2.99 percent at the end of September, followed by KB Kookmin Bank at 1.93 percent, Standard Chartered Korea at 1.52 percent and Citibank Korea at 1.43 percent. The ratio was lowest at Hana Bank at 1.25 percent. The bad loan ratio at Woori Bank jumped from 1.98 percent in the first quarter to 2.9 percent three months ago before reaching 2.99 percent as of the end of September.

Overall, among 18 financial institutions including regional and special banks like the Export-Import Bank of Korea and the Industrial Bank of Korea, the state-controlled Korea Development Bank had the highest percentage of bad loans with 3.25 percent. KDB’s figure is more than double the ratio of what the FSS aims for this year at 1.49 percent for all financial institutions. KDB recently was attacked by lawmakers at its parliamentary audit session for being too aggressive in buying stakes of ailing companies in recent years.

According to industry sources, state-run KDB and Woori Bank have relatively large amounts of commercial loans - 98.6 trillion won and 177.5 trillion won, respectively, as of the end of September. Both banks are creditors of debt-ridden STX Group, whose main affiliates are struggling to get back on their feet.

“The bad loan ratio for KDB and Woori has reached a level we haven’t seen since the 1997 Asian financial crisis,” said an industry official.