Foreign deposits in Korea just keep on going up

Foreign deposits in Korea just keep on going up 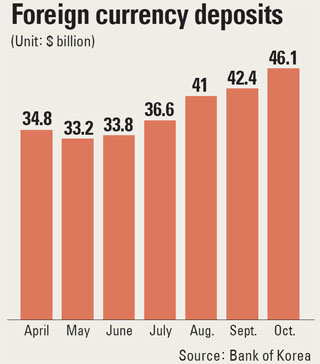 Foreign currency deposits of Korea residents have reached an all-time high largely thanks to robust exports.

According to the Bank of Korea, as of the end of last month, foreign currency deposits expanded from $3.7 billion in September to $46.1 billion.

Foreign currency deposits fell in May, but have been growing ever since.

Deposits have set new records each of the past three months since posting $41 billion in August.

In previous years, foreign currency deposits by companies accounted for more than 90 percent.

Deposits owned by companies added $3.4 billion and individuals $190 million from the previous month.

The central bank in its statement cited an increase in issuance of stocks in overseas markets and strong exports as the primary contributors to last month’s growth.

According to the Ministry of Trade, Industry and Energy earlier this month, Korea’s exports set a record last month with outbound shipments that exceeded $50 billion.

Exports, which declined the previous month largely because of the Chuseok holiday, grew 7.3 percent year-on-year. It was the second month this year that exports increased 7 percent or more.

The better-than-expected growth was largely attributed to the recovery in advanced economies. Previously, brisk export growth was led by substantial demand from emerging markets.

In October, exports to the United States grew 23.2 percent, while exports to Europe were up 16 percent. Exports to Japan continued to struggle, declining 8.8 percent.

Furthermore, exports to China, which has been the biggest reason the Korean economy has been able to stay above water, saw decelerating growth, increasing only 5.5 percent.

Exports to Asean and other emerging markets, such as Southeast Asia, either slowed or declined.

Although there are concerns that the increased deposits of foreign currencies could further pressure the appreciation of the Korean currency that has already strengthened to a tipping point, the central bank was confident that in the long run the impact will be limited.

However, due to the strengthened won, many experts are doubtful that major exporters are likely to convert their foreign currency.

The won closed at 1,061.4 won against the U.S. greenback after depreciating half a won from the previous day.

Meanwhile, the Korean banks accounted for the majority of foreign currency deposits at $41.5 billion, or 90 percent. The remaining $4.6 billion is stashed at foreign banks’ local branches.

The dollar still accounted for most of the foreign currency deposits at $39 billion, followed by the Japanese yen at $2.5 billion and the euro at $2 billion. Deposits of Chinese yuan amounted to $1.6 billion.

The deposits only include local residents as well as foreigners and foreign companies stationed in Korea for more than six months.