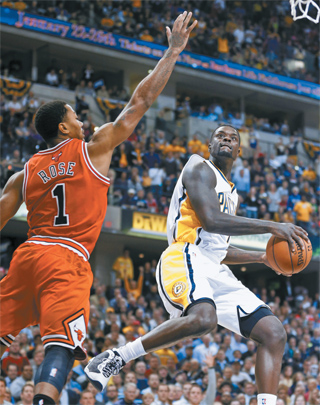 Indiana Pacers’ guard Lance Stephenson, right, goes past Chicago Bulls’ guard Derrick Rose for a shot in the second half in Indianapolis, Wednesday. The Pacers defeated the Bulls, 97-80. [AP/NEWSIS]

INDIANAPOLIS - Luis Scola, Donald Sloan and Lance Stephenson accounted for all the points in a decisive 12-2 run, thwarting a late charge by the Chicago Bulls and sending the Indiana Pacers, the NBA’s last unbeaten team, to a victory of 97-80 Wednesday night.

The Pacers are 5-0 for the first time since 1971-72. Paul George had 21 points and six rebounds to lead Indiana, while David West had a season-high 17 points and 13 rebounds.

Luol Deng and Derrick Rose scored 17 points each to lead Chicago (1-3). Rose scored only three points in the second half.

For three quarters, it was topsy-turvy. Then, with Chicago leading 67-65 with 8:38 left, things changed quickly.

Sloan hit a 17-footer to tie the score. Stephenson gave Indiana the lead with a 3-pointer. Scola followed that with consecutive baskets and Stephenson closed the run with another 3 to make it 77-69. The Bulls never seriously challenged again.

After missing all seven shots he took in the first half, Stephenson finished with 15 points - all but three coming in the final 12 minutes of a game that looked more like a 15-round title fight.

Bodies crashed hard to the court all night, and the game got progressively more physical.

It took a toll.

Pacers backup center Ian Mahinmi left late in the third quarter with a sprained left ankle and did not return. Chicago guard Kirk Hinrich was called for a flagrant foul in the fourth. There was a resounding thud in the arena when Joakim Noah of the Bulls crashed hard to the court trying to protect his own basket late in the fourth.

Until the final stretch, neither team could get the upper hand in this defensive slugfest.

Indiana led 25-19 after one quarter, trailed 43-37 at halftime and then looked like they might pull away in the third after opening the quarter on a 10-2 run to reclaim the lead. The Pacers followed that spurt with a 9-2 run that ended with George’s 3-pointer to make it 56-51. Sloan’s three-pointer with 1:12 left in the third extended the margin to 63-55.

Hinrich answered with a 3, and then George fouled Deng on an 11-footer. Before Deng could finish the three-point play, Pacers coach Frank Vogel drew a technical. Chicago made both free throws, trimming the deficit to 63-62.

“We just play hard. We feel like that we going to bring it every night on the defensive end, offensive end and we going to find a way to get that ‘W,’?” Stephenson said. “And we did that tonight.”