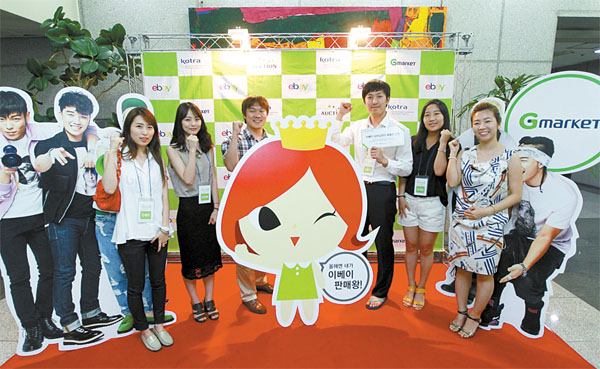 Participants pose at an orientation for eBay Korea’s third awards contest for top sellers, which was held from May to October this year. Provided by the company

An affiliate of the world’s largest online marketplace, eBay Korea, is at the forefront of helping small and midsized enterprises (SMEs) reach out to overseas markets.

CBT has been receiving favorable responses from aspiring exporters. Last year, more than 200,000 sellers were educated by eBay Korea on how to successfully export their products.

With regular information sessions and classes, Korean sellers have been growing at a steady annual pace of 30 percent in the last three years. The number recently reached 7,000.

The scale of exports through eBay has also expanded by over 40 percent annually, and the amount of accumulated transaction through Korea’s CBT program recently surpassed 200 billion won ($188.4 million). The sheer pace of expansion is the fastest among Asia-Pacific countries that use eBay.

Some sellers have been making noticeable achievements through the useful CBT program. This year, a Korean business was named an eBay “titanium seller,” a label given to a top-level merchant with an accumulated sales record of $1.8 million.

A 27-inch computer monitor manufactured by a domestic SME also set a record through eBay’s “Daily Deals,” or short-term offerings of price discounts. The sales volume for the monitor reached 200 million won in just one week - the highest record for a product under the Daily Deals section in the Asia-Pacific region.

Meanwhile, Gmarket launched GEP last September to help sellers adopt a seamless sales procedure when dealing with requirements of different markets. Gmarket offers full guidelines and support throughout the whole process: from registering on eBay to delivering to consumers.

Currently, around 1,500 Gmarket sellers are using the service to overcome their small size and restricted access to information.

An analysis of products sold through GEP in the past year indicates that TV monitors were the biggest selling items, followed by cosmetics and shampoos. Cooking utensils such as frying pans and camera equipment were also on the best-seller list.

“Exports through eBay have been growing constantly, by 20 [percent] to 30 percent each year,” said Na Young-ho, director of international trade at eBay Korea.

“Small-business owners have been making quite a progress in terms of pioneering new export venues and recording sales volumes. We will continue to develop diverse programs to assist them in reaching foreign markets.”