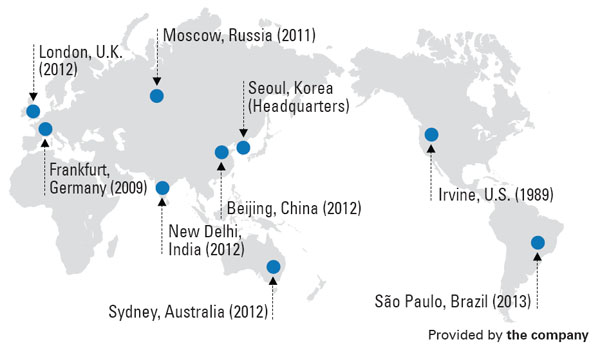 Finding the domestic market saturated, Korean financial companies are turning their attention overseas. The task has not been easy. By the end of 2012, nonbanking financial companies were greeted with deficits, and banks faced more than a 10 percent decline in net profits compared to the previous year.

Hyundai Capital, the financial arm of Hyundai Motor Group, is proving to be an exception. The affiliate has been establishing a firm foothold in the global market, with a unique business focus on “auto finance.”

The Korean financial company currently has branches in nine countries, including the United States, China, India, Brazil and Russia. Its foreign assets marked 23.2 trillion won ($21.9 billion) as of September, outstripping its domestic assets of nearly 21 trillion won, according to the industry. Experts forecasted that its foreign assets would grow even more in future, as the company plans to branch out to a total of 23 countries by 2015.

Partnerships and localization have been the key to Hyundai Capital’s exceptional performance. Collaboration with Hyundai Motor led the company to focus on “auto finance,” facilitating sales of Hyundai and Kia automobiles by providing customized installment plans and auto leases to customers.

Hyundai Capital’s first official partnership is with General Electric (GE), which particularly gives it an edge. Since GE and Hyundai Capital formed a join venture in 2004, the two have been exchanging expertise on finance, financial products, IT, corporate culture and so on.

In 2009, Hyundai Capital also established a partnership with Santander, the biggest bank in Europe, in order to launch its first European branch in Germany. Such partnerships have improved the global brand awareness of Hyundai Capital, as well as its internal capacities.

Another reason for the company’s success is that it achieved effective localization while retaining its unwavering corporate identity. Rather than targeting overseas Koreans, Hyundai Capital aims to fully immerse itself into local communities. The company hires local employees rather than sending expatriates from its headquarters. For example, Hyundai Capital America employs 1,100 local people but only 9 Korean expatriates.

Despite systematic localization, corporate identity is well preserved and is blended into Hyundai Capital’s innovative culture. In any foreign branch of the company, employees can enjoy a “flex lunch” by adjusting their lunch time as per their convenience, and can wear casual outfits during “casual week” four times a year.

“Many companies use the expression ‘overseas expansion’ to describe their business overseas,” said a Hyundai Capital official. “However, it implies that Korean methods and cultures have to be transferred abroad. We want to be known as a ‘local financial company’ rather than a foreign financial company that expanded into the local market.”