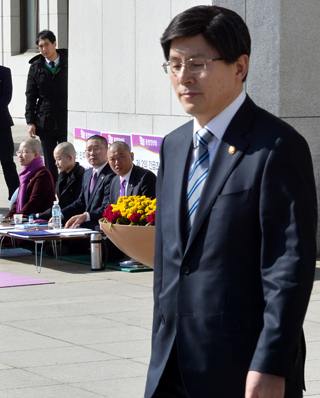 Following the government’s request to the Constitutional Court to dissolve the far-left Unified Progressive Party, the Justice Ministry has taken steps to find a way to disband civic and underground organizations considered a threat to the state by the nation’s highest court.

Its renewed objective, ministry officials declared, is to pass legislation that would eventually empower the government to disband such anti-state groups.

The Justice Ministry recently strengthened its task force - which prepared the government’s unprecedented legal motion requesting the dissolution of the UPP - adding seven new members to the team. The three additions include one prosecutor, three judge advocates and three constitutional law experts.

“The UPP is just the tip of the iceberg,” said one Justice Ministry official, who spoke on the condition of anonymity. “We have once again confirmed over the course preparations for the petition [to dissolve the UPP] that there are a number of individuals and groups that are blatant Pyongyang-supporters.”

In an exclusive report by the JoongAng Ilbo, instructions sent by Pyongyang to underground groups in the South were attached to government’s petition to the Constitutional Court that requested the dissolution of the UPP.

In the instructions, Pyongyang authorities pointed out that “though there are many underground and activist groups,” they “lack systematic structure” and are “stymied by lack of cohesion.

“There is no leadership group commanding these underground groups in a systematic manner,” the instructions read.

Another task force official, who also requested anonymity, said the instructions serve as a barometer of “yet-to-be uncovered pro-North groups in the South.”

“The truth about Pyongyang sympathizers is revealed in the petition, with the UPP in the center [of it all],” the official said.

A main objective of the ministry’s task force is to make sure dissolved parties or groups are not reborn with a simple name change.

“Some enemy-friendly groups keep doing what they’ve been doing just by changing their names [after the Supreme Court’s ruling],” said one prosecutor.

The Justice Ministry’s recent move to bolster the task force came against the backdrop of the government’s apparent lack of legal authority to disband groups declared anti-state or enemy-friendly.

However, moves to come up with such legal measures are currently under way in the political arena.

Yoon Sang-hyun, deputy floor leader of the ruling Saenuri Party, said Wednesday that the party will introduce a bill that will strip the status of Assembly members belonging to disbanded political parties, as well as a bill to enable the government to shut down anti-state groups.

According to data released by the National Intelligence Service and the judiciary, there are 25 organizations declared anti-state or enemy-friendly by the Supreme Court.

Per legal definition, anti-state groups actively pursue to overthrow the Southern government, an objective shared by North Korea’s Workers’ Party. Organizations that praise or sympathize with anti-state groups knowingly doing harm to the state are characterized as “enemy-friendly.”