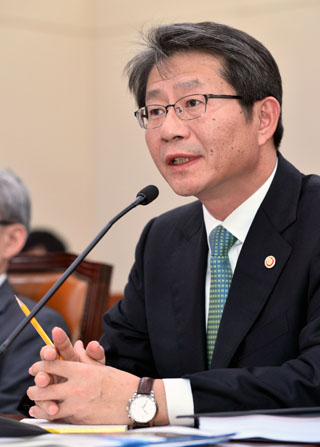 Final approval of a government road map to determine the development of inter-Korea relations during the Park Geun-hye administration was postponed in the National Assembly yesterday due to disagreement between ruling and opposition party lawmakers.

The Ministry of Unification yesterday approved the second development in the inter-Korean relations policy plan, which follows the first road map set forth in November 2007 under the Roh Moo-hyun administration.

However, squabbling between lawmakers led to a postponement of the plan’s actualization.

Democratic Party lawmakers said yesterday that the framework must first undergo review by the cabinet before it can be approved by the National Assembly. They added that the 2007 plan under Roh underwent a cabinet review and a presidential review before being considered by the Assembly.

Saenuri Party lawmakers countered by saying that both parties had agreed to receive the Unification Ministry’s development report that day.

Once approved, the plan is expected be the official framework for relations between the two Koreas for the next five years.

The core of the plan revolves around improving ties between the North and the South, in line with President Park Geun-hye’s policy of trust-building on the Korea Peninsula.

The South eventually hopes to propose large-scale economic projects, though that is largely dependent on Pyongyang’s efforts toward denuclearization.

The road map is divided into four main points, namely encouraging a balance between security and exchange, drawing up the conditions for change in the North, preparing phased and practical steps toward unification and pushing for prosperity in Northeast Asia through North Korean policy.

Ten major tasks are also listed in the plan, and those include measures for dialogues between state authorities, practical solutions to humanitarian issues, cooperation on unification policy, the normalization and development of the Kaesong Industrial Complex and a solution to the North Korean nuclear problem. The plan also touches upon expanding unification diplomacy to draw international understanding on the issue.

The first road map for inter-Korea relations outlined in 2007 during the Roh administration included a clause promoting a special zone for peace and cooperation in the West Sea.

Partly due to controversy surrounding the issue, that concept was not included in the current framework.

Unification Minister Ryoo, speaking earlier this week at a budget committee meeting, said that conditions for an inter-Korea summit have currently not been met, despite President Park saying in an interview with a French daily newspaper that she is open to talks with North Korean leader Kim Jong-un at any time.