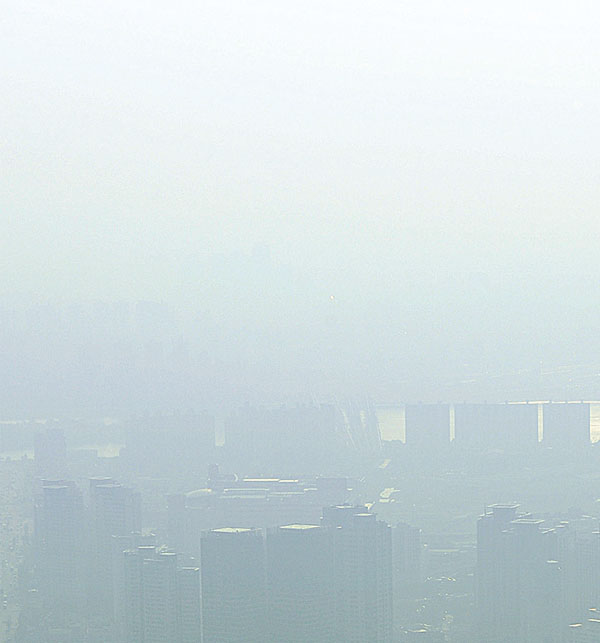 Buildings and streets are barely visible under the heavy smog hanging over Seoul on Nov. 5. The heavy air pollution, believed to come from China, is expected to envelope the city further during peak winter months. [NEWS1]

As the winter season draws near, the threat of impending smog from China has kept Korea on alert.

The Ministry of Environment and the National Institute of Environmental Research said that they detected abnormal air pollution 19 times this year, where the amount of particle pollution exceeded the safety threshold of 100 micrograms per cubic meter for 12 hours. The record far exceeds last year, which only saw three instances of abnormal air pollution. In 2011 and 2010, there were 11 instances.

Particle pollution is a combination of liquid and solid matter. Particles less than 10 micrometers in diameter - known as PM-10 - which is smaller than the circumference of a single hair, are small enough to be inhaled into the lungs, which can cause serious respiratory problems.

In January, fine-particle pollution hit for six consecutive days, with one instance lasting more than 72 hours.

“The overall amount of fine-particle [pollution] increased this year in China, which resulted in a severe degree of smog in neighboring Korea,” said Hong Yoo-deok, a researcher at the National Institute of Environmental Research.

He added that Korea’s atmospheric conditions have made the matter worse.

“Wind speeds are very low, so water particles carrying pollutants are hanging for longer amount of time,” the researcher added.

The concern now is that this is only the beginning. The condition will likely worsen, officials say, when Chinese power plants start burning massive amounts of coal for heating during peak winter months. Those operations could cause a massive amount of fine-particle pollution to spread.

These fine particles - also known as PM-2.5 - are less than 2.5 micrometers in diameter and come from all types of combustion, notably industrial processes. Particles of this size are considered to be particularly hazardous because they are easily absorbed into the lungs.

These pollutants are also known to contain various elements - nitrates, sulfates, metals and dust particles - that are harmful to humans.

Fine particles (PM-2.5) accounted for 85 percent of all fine particles detected in Seoul and its surrounding areas on Oct. 29, a level far higher than the average 69 percent.

Earlier that week, in perhaps an ominous sign, China ordered primary and middle school students in the northern city of Harbin to stay home after severe smog prompted an emergency. Visibility there was severely reduced, and the density of fine particles (PM-2.5) soared to 20 times the level the World Health Organization considers permissible for daily exposure.

If inhaled, smog - a combination of fog, smoke and pollution - can be harmful to a person’s respiratory system, and health professionals point out that there is a strong link between exposure to fine particles (PM-2.5) and the risk of developing heart disease or lung cancer.

“Super-fine particles can significantly increase the risk of heart attacks, asthma attacks and bronchitis, as well as respiratory disorders and stroke,” said Lim Jong-han, a professor of preventative medicine at Inha University’s medical school. “They also contain harmful elements that can cause different kinds of cancers.”

The Environment Ministry said it has continually raised concerns over the issue in a series of meetings with China.

However, there is no concrete framework in place between China, Korea or Japan - which also complains of invasive Chinese-born air pollution - for how to deal with the problem. “We suggested that three countries sit down to resolve the smog issue in May at a ministerial-level meeting,” said Jeong Bok-young, of the Environment Ministry, “and the three countries agreed to talk and cooperate in devising atmospheric policy.”