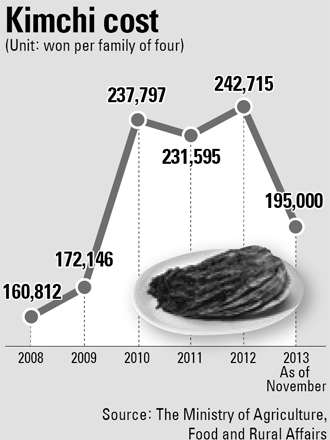 The Kimchi Index, an indicator of the cost of making Korea’s signature dish, has been released by the government for the first time to provide price information for consumers, to help them make good decisions during kimchi-making season.

The Ministry of Agriculture, Food and Rural Affairs said yesterday that the index included prices for ingredients like Napa cabbage, garlic, parsley, red pepper and oysters, and calculated the overall cost price based on retail prices provided by the Korea Agro-Fisheries and Food Trade Corporation.

According to the index, the cost of making a year’s worth of kimchi for a family of four this month is the lowest it has been in the past four years at 195,000 won ($183).

In constructing the Kimchi Index, the ministry eliminates the highest and lowest prices over the past five years and uses the average of the remaining three years (213,846 won) as a 100-point baseline.

According to the ministry, the Kimchi Index for November this year is 91.3, which is the lowest in four years.

“Thanks to the improved weather conditions, the overall vegetable crops for kimchi went well, which contributed to the decline in prices for kimchi-making this year,” said a ministry official.

For the past five years, the Kimchi Index was the highest in October 2010 at 152.6, when the price of napa cabbage surged and the cost of making a year’s worth of kimchi for a family of four reached 326,387 won, 45 percent more than the average cost for the same month in the previous years.

Among all the ingredients for making kimchi, the cost of napa cabbage accounts for 27.6 percent, red pepper 19.4 percent, oysters 11.7 percent and radishes 7.8 percent.

The ministry plans to announce the index every month.