Birds of a feather flock together in Cheonsu

Birds of a feather flock together in Cheonsu 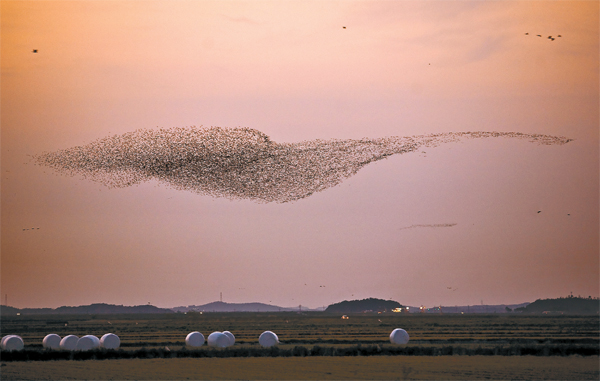 Baikal teals fly together at sunset during November 2011 at Cheonsu Bay. The site is popular among the world’s photographers, many of whom visit the country every year to photograph the birds. By Cho Yong-chul

CHEONSU BAY, South Chungcheong - Green leaves fall from the trees and a piercing wind makes me cooler. It is already November when I feel like everyone around me has gone away, making me feel like I am the only person in this small world. That’s right. I’m between fall and winter.

Though I feel like I’m alone, there are guests coming to the place where I am - migratory birds. I don’t exactly know how far they have flown or where they are from, but they land on some random farmland they might have visited a year ago. I’m here to see the painstaking effort of these birds to survive in nature.

It’s 6 a.m. and it’s still dark. I turn off the engine of my car and go outside. It is quite chilly. When I hurriedly button up my jacket, a thundering noise that sounds like wild geese honking hits my ears.

Because it was dark, I had trouble finding out where the sound was coming from. I don’t know if it is coming from the sky or the land. I can’t even imagine how many birds are honking. 10,000? 100,000? No, it could be a million birds judging by the sound. I’m in the middle of a whirlwind of a roar produced by some hundreds of thousands of birds. I feel very small compared to nature.

The world is awake. My eyes can’t see it, but my ears know it. I already forgot how chilly the weather was, and I’m just listening to the birds honking. I’m not watching birds. I’m listening to them. Experiencing the world only with your ears is amazing. That’s why I’m here before sunrise. 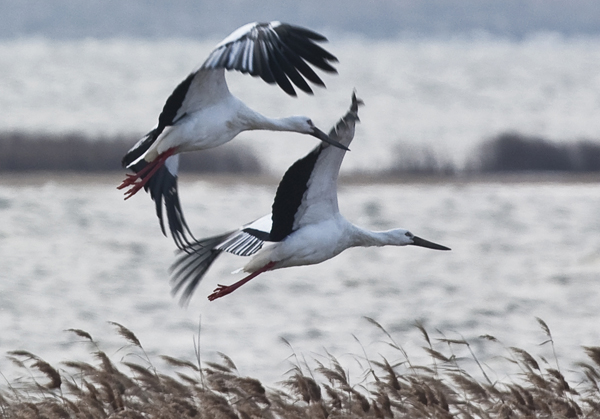 Storks, like the ones featured above, used to be seen on the Korean Peninsula, but most of them vanished after the 1950-53 Korean War. A few of them appear at Cheonsu Bay in the winter before they return to Siberia.

The sun rises and the water of the bay shines like scales. It’s a scene I’ll probably never forget. Tons of small dots of farmland start wriggling and soon become big, long lines. Those lines later break into small dots again but stay as a group. It looks like they are swarms of bees - or maybe a giant cloud. Then, they change direction and fly into the sky.

Every time they change direction it looks like a snake gliding past a river, and their flapping looks like a traditional dancer wearing hanbok, or traditional Korean clothing. The groups of dots cross a river and land close to me. They are spectacled Baikal teals - or small freshwater ducks.

Baikal teals fly in a group twice a day, around sunrise and sunset. At night, they feed themselves and return to the water to sleep in the morning. They then come back to land again in the evening to find food.

I’m not sure why they fly together, but I can guess. Baikal teals are one of the smallest species of duck. The body of a grown-up teal is about a size of an adult’s fist. When they fly, it is neither fast nor high. Staying and flying together is a way to protect themselves from natural enemies.

When I saw spectacled teals fly together for the first time on an early winter morning in 2003, I cried a lot. Not out loud, but tears fell down my face. 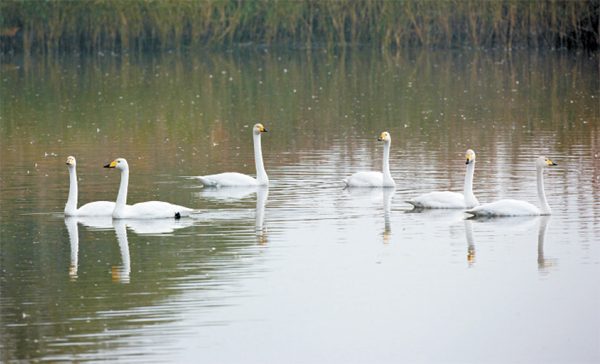 Whooper swans are among the dozens of species of migratory birds that come to Cheonsu Bay every year, along with Chinese geese and black-faced spoonbills. By Cho yong-chul

It wasn’t because only the scene was beautiful. I saw their painstaking effort to survive in nature, just like people do.

“Baikal teals” literally means ducks on Baikal Lake, the oldest and deepest lake in the world, located in Siberia, Russia, which is where the teals are from.

The teals live in Siberia from spring to fall and move to warmer southern climates when winter approaches. They pass Manchuria and the Yellow Sea. Their final destination is where I am now - Cheonsu Bay. In early November, about 90 percent of them, or about 300,000, come here. Photographers from around the world visit this small and remote place in South Chungcheong to photograph them.

But I haven’t seen that many teals this year. Maybe they are somewhere near Baengnyeong Island in the Yellow Sea, some 230 kilometers (142.9 miles) northwest of Seoul, although about 150 hooded cranes, other winter visitors to the bay, have already arrived. But I’m not disappointed. They will be here soon, dancing together just like they have done for so many years.

Baikal teals stay at the bay for about a month. They stay here in early winter, then move southward to Haenam, South Jeolla, and Changwon in South Gyeongsang to get through the winter. If I don’t see them in Cheonsu, I will see them in Gunsan, a route to Haenam where the beautiful Geum River is, and I can wait for them at Gocheonam Lake in Haenam.

From Nov. 22 to 24, the Gunsan World Migratory Birds Festival will be held in Gunsan at the Geum River migratory birds observatory, and at Geumgang Ecological Park and Napo Field. To run the program in a more eco-friendly style, the Gunsan city government decided not to hold a series of concerts or shows, but to set aside about 50 hectares (123.6 acres) of land as a paddy so that migratory birds will have a place to feed themselves.

The Gunsan city government created a migratory bird mural street near the observatory and will also run a series of nature experience programs, including making bird-feed buckets and a treasure hunt program that involves solving riddles about birds.

There will also be a migratory bird photo contest and a bird drawing contest.

One of the most interesting programs in the festival will be the bird watching. A commentator will explain details about migratory birds and tourists will have a chance to watch the Baikal teals flying together. The bird-watching program will continue until February.

The festival has been included in a U.K. nature documentary program and the Ministry of Culture, Sports and Tourism designated Gunsan as one of the 99 domestic tour sites that people should visit in their lifetime.

Large swaths of agricultural land with wide fields of reeds stretch along parts of the Geum River, attracting about 50 different kinds of birds, including Baikal teals, whooper swans, Chinese geese and black-faced spoonbills. More information can be found on the official Web site (www.gmbo.kr) and people can ask questions via phone at 063-454-5680.

The Gunsan city government said visitors should not wear clothes with deep primary colors as birds are very sensitive to those colors. Visitors should also not use strong perfume. However, the use of binoculars is welcome because people should stay at a certain distance away from the birds.

“Every year we prepare this festival, we hope people get a chance to learn more about birds and ways to protect them and to coexist with them,” a spokesman of the Gunsan city government said.

Cheonsu used to be a sea, but Hyundai Group founder Chung Ju-yung developed the region as a bay through a reclamation project. The reclaimed land has been used for farming, and the water between the farmland became a river that supplies agricultural water. Years later, that river became a place where hundreds of thousands birds visit. Now, farmers leave grain on the land for the birds.

There were also birds here when Cheonsu was a sea. Most of them were sea birds, such as snipes and cormorants, but they are gone.

Now, most of the birds in the area are winter visitors such as Baikal teals, wild geese, storks, hooded cranes and spoonbills.