This boss likes to get everybody involved

This boss likes to get everybody involved 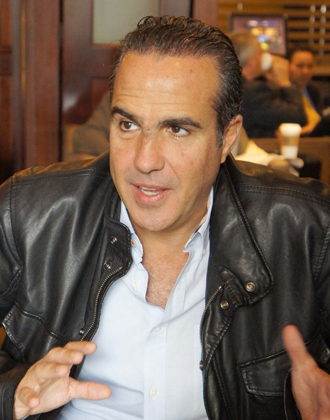 Xavier Lopez, CEO of KidZania, a Mexican chain of family entertainment centers, believes in the power of doing things together.

In recent years, he took on challenges such as quitting smoking or losing weight through annual corporate campaigns. This year, he entered the New York City Marathon, together with his employees.

He finished the marathon. Twenty-seven Mexican employees and Jin Hyun-sook, the head of the Korean branch, ran with him.

Doing things together makes it easier to realize a goal, he said. It’s also fun - a theme KidZania has thrived on for the past 15 years.

Using an indoor-themed park setting, KidZania has provided children with places and tools to play. Launched in Mexico in 1999, the company has gone global, with 15 branches in 12 countries. Mexico has three branches including the headquarters in Santa Fe. Japan has two branches and Korea has one at Jamsil, southern Seoul.

The idea for the company came from a friend of Lopez. The friend, who was working in the private equity sector of General Electric, suggested they build a day care center for children.

He didn’t like the idea that much, but one thing his friend said clicked, which was to provide children with an environment in which they could do role-playing games. It struck him that all children love role-playing games and that there was nothing that helped realize a child’s dream to be a firefighter so immediately as by putting them in a firefighting costume. The idea developed, and the outcome was KidZania.

At the centers, children can experience various types of jobs, play with tools related to the jobs and wear the respective costumes. They can also take part in economic activities with KidZania currencies, with which they can make purchases and create bank accounts.

Success was immediate, Lopez said. In the year the company was founded, 400,000 people visited the centers. That number doubled a year later. The company, which has about 7,000 worldwide employees and 650 corporate partners, expects to have $7 million in earnings this year.

Lopez said he feels good about the success but stressed his business is not just geared toward making money. He said helping the community with educational opportunities for children is another pillar for his business.

He added that he feels rewarded when he sees that the children who visited KidZania more than a decade ago are returning there with their own children.

He said children in Korea and Japan are distinctive in that they are more interested in making money than spending it. He visited the branches of two Asian countries and saw few children in the shopping areas. Instead, the children were eager to have vocational experiences. He said it was good to see that Korean children in particular were serious about their activities.