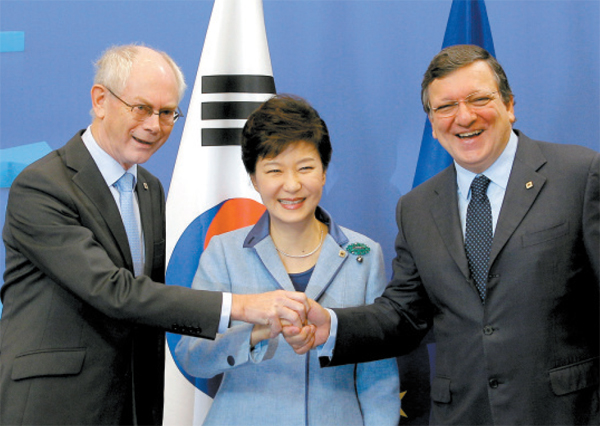 BRUSSELS - Korea signed a tentative deal recognizing Croatia’s induction into the Korea-European free trade agreement (FTA) - which is expected to broaden Korea’s foothold in the European Union - at a summit here yesterday between President Park Geun-hye and EU leaders.

President Park’s tentative signing of the revised edition of the Korea-EU FTA has added Croatia earlier than expected, which became the 28th member of the European Union on July 1.

The deal is estimated to boost Korea’s exports to Europe by $10 million and imports from Europe by $2 million over the next five years, according to the Korea Institute for International Economic Policy. The EU is the world’s largest economic bloc with a population of 500 million.

“We look forward to the continued expansion of our bilateral trade and investment through the full implementation of the FTA,” read the joint declaration issued at the summit, which commemorated 50 years of diplomatic ties between Korea and Europe.

The declaration describes the FTA as the driving force for cooperation, bringing considerable benefits to companies and consumers. Korea became the first Asian country to forge a strategic partnership with the EU in 2010, making it Korea’s No. 4 trade partner.

President Park reiterated at the summit the importance of collaboration between Korean scientists and businessmen and their European counterparts. Park signed an agreement at the summit making it possible for Korea to dispatch scientists to the European Research Council under the EU.

Korea and the EU also celebrated the opening on Friday of a Korea-EU Research and Innovation Center in Brussels, and agreed to proceed with the Korea-EU Flagship Program, dedicated to increasing cooperation in the technology sector. Park and European leaders also acknowledged the need to address key global challenges through practical cooperation on issues like human rights, development, nuclear energy and cybersecurity.

“Sharing an ambitious vision for a prosperous future, we reaffirm our determination to further consolidate, deepen and diversify our strategic partnership in all areas of mutual interest at the bilateral, regional and global levels,” the declaration said.

It also noted the two parties’ commitment to the denuclearization of North Korea.

President Park has met with Barroso twice before. The first time was when she was sent to Belgium as a presidential envoy in September 2009 under former President Lee Myung-bak. The second was two months ago at the G-20 meeting in St. Petersburg.

She is set to fly back to Seoul on Friday afternoon, concluding an eight-day trip to Paris, London and Brussels.