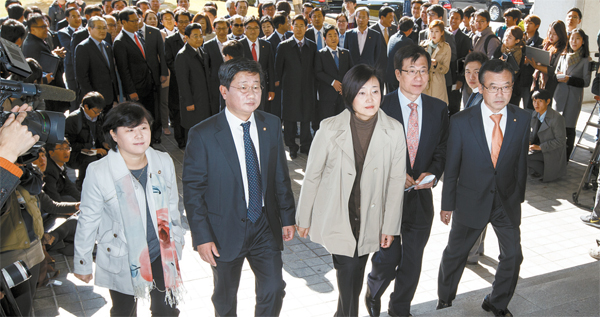 Democratic Party lawmakers on the National Assembly’s Legislation and Judiciary Committee enter the Supreme Public Prosecutors’ Office in Seocho-dong, southern Seoul, to meet with acting Prosecutor-General Kil Tae-ki. They met with Kil for about 40 minutes, voicing their complaints. [NEWS1]

The Democratic Party yesterday intensified its battle against the Park Geun-hye administration over what it called an unfair probe into the scandals surrounding the 2007 inter-Korean summit transcript and last year’s presidential election.

The largest opposition party boycotted all events scheduled at the National Assembly and demanded an independent counsel investigation.

“We can no longer trust the prosecution on the issues concerning the presidential election,” Democratic Party Chairman Kim Han-gill said yesterday at the party’s leadership meeting. “They are conducting an extremely biased investigation.”

Kim also said that the National Assembly should launch a special committee to reform the National Intelligence Service, which is accused of running an illegal cyber campaign to support Park during the election.

He said the president, after she returns from her overseas trip today, must answer his proposals.

The DP chairman also canceled his pre-arranged meeting with Prime Minister Chung Hong-won yesterday, while the Democrats boycotted the legislative sessions. All committee deliberations scheduled for yesterday were canceled.

Kim also criticized the prosecution for humiliating the DP’s former presidential candidate, Moon Jae-in, by summoning him publicly for questioning while conducting investigations through written inquiries with Park’s confidants.

A bipartisan lawmaker’s probe and another investigation by the prosecution, however, later revealed that the transcript was missing from the National Archives.

The prosecution is currently handling two separate but related cases on the summit transcript. Moon and other Roh Blue House officials were questioned about the disappearance of the transcript, while Park confidants, including Representative Kim Moo-sung and Korea’s Ambassador to China Kwon Young-se, were accused of illegally obtaining the sealed presidential record and using it against Moon before the election.

Representative Moon, former chief of staff for the late President Roh, was grilled by the prosecutors for nine hours on Wednesday about the mysterious absence of the summit transcript from the National Archives.

After a senior prosecutor at the Seoul Central District Prosecutors’ Office said Thursday that former Park campaign managers would be questioned through written inquiries, the Democrats erupted.

The Seoul Central District Prosecutors’ Office said yesterday morning that it will individually summon Saenuri Representatives Kim Moo-sung, Chung Moon-hun and Suh Sang-kee next week. The prosecution also said it had completed questioning Ambassador Kwon through a written statement. “We did so because it is hard to summon the ambassador from China,” said a source from the prosecution.

After boycotting the legislative sessions, about 60 lawmakers from the DP paid a visit to the Supreme Public Prosecutors’ Office to protest. Six of the lawmakers on the National Assembly’s Legislation and Judiciary Committee also met with acting Prosecutor-General Kil Tae-ki for about 40 minutes to voice their complaints.

DP lawmakers claimed the prosecution was trying to fool the public by belatedly changing its plan and announcing the summons of Park’s associates.

The Democrats also scheduled a rally at the Seoul Plaza today to step up its offensive on the Park government. It will launch a joint conference with civic groups and the religious community on Tuesday to demand a fair investigation into the election scandal. But despite demands, the Saenuri Party yesterday turned down an independent counsel investigation.

The Democratic Party said it will stick with scheduled confirmation hearings for Park’s nominees for the heads of the Board of Audit and Inspection, the Health and Welfare Ministry and the prosecution next week, adding that yesterday’s boycott was just a one-time protest.