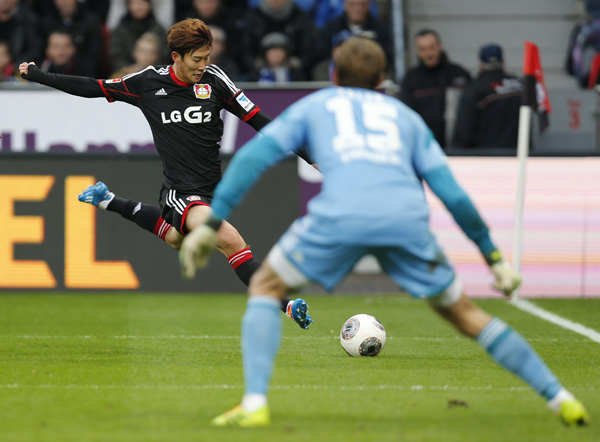 The 20-year-old South Korean striker led Leverkusen’s offense with three goals and an assist in the 2013-14 Bundesliga season’s 12th-round match in Bay Arena.

Leverkusen, which is ranked third in the league with 28 points, has a record of 9 wins, 1 draw and 2 losses this season.

Son’s hat-trick is the first by a Korean professional football player in any of the European leagues. None of Korea’s retired or active football players, such as Cha Bum-kun, who played in the Bundesliga from 1979 to 1989, or Park Ji-sung, who plays for PSV Eindhoven of the Netherlands, has accomplished the feat.

The three goals came in counter-attack situations. In the ninth minute, Son received the ball from midfielder Gonzalo Castro, who cut off Hamburg’s pass in the center circle area. Son then penetrated into the left side of the penalty box and scored the team’s first goal with his left foot after passing Hamburg defender Heiko Westermann. The goal was his first since a Sept. 25 DFB-Pokal Cup match against Bielefeld.

His second goal came seven minutes later. Midfielder Emre Can cut off another Hamburg pass and passed the ball to Son, who was staying close to the half line. He took possession and ran like a bullet to the opponent’s goal area. After racing past two Hamburg defenders, Westermann and Jonathan Tah, he also passed the goalkeeper and kicked the ball into the net.

“I feel a bit sorry [for Hamburg] as they are my former team, but I’m very happy,” Son said after the game. “The game was very special for me. I’m very pleased that I had my first Bundesliga hat-trick.”

Son was selected as the man of the match and Bundesliga’s official Web site praised him, saying, “Son became the first Korean player to score a hat-trick in the history of Bundesliga.”

The hat-trick was completed in the 55th minute. When a shot by striker Stefan Kiessling hit a Hamburg defender and rolled over to Son, he shot it to the right corner of the net, giving Leverkusen a 3-2 lead. In the 72nd minute, he assisted on Kiessling’s goal, which made the score 4-2.

“It was a great win,” said Leverkusen coach Sami Hyypia. “But as the coach of the team, it wasn’t fun to watch my team allowing three goals in a game.”

It seems like Son’s tremendous performance attracted attention in England. Hours after Leverkusen overpowered Hamburg, several U.K. media outlets reported that Son is back on English Premier League teams’ wish lists in the coming winter transfer season, adding that Arsenal coach Arsene Wenger and the Tottenham Hotspurs are aiming to acquire Son. They said that these teams have been trying to acquire Son since last summer and still are seeking a decent striker like him.

“The reason he struggled in scoring was because not so many good passes were given to him from midfielders,” football analyst Song Young-joo said.

“But there were some good passes to Son, especially in counter-attack situations, and Son didn’t miss those chances. I think he will be in a good shape at least in the next few games as he finally scored goals for the first time since September.”