As cabbage prices fall, so do farmers’ fortunes

As cabbage prices fall, so do farmers’ fortunes

A farmer works on her cabbage patch at a field in Sejeong, South Chungcheong, late last month. Prices have been falling because of the oversupply of cabbages, which was largely caused by the mild weather. [NEWSIS]

It’s once again that time of year when houses across the nation are busy purchasing Napa cabbages to make the nation’s staple food, kimchi.

While consumers are shrieking with joy over the lowered price of the cabbage, the situation isn’t all that welcoming for farmers like 51-year-old Chung Jae-wook, who owns a 33,000-square-meter field in Gochang, North Jeolla. 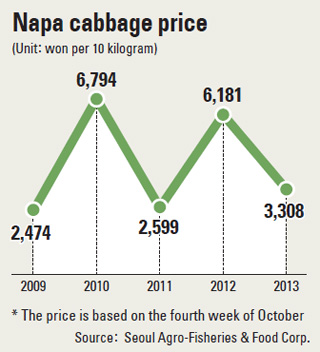 Instead of tending his field, Chung is spending most of his time trying to find a wholesale buyer he signed a contract with in September.

The buyer agreed to purchase Chung’s cabbages for 50 million won ($46,989), or 5,000 won for each 3.3 square meters of the field. However, since the price of Napa cabbages fell, the buyer is no longer reachable.

This year, there has been a good harvest, with the cabbages plump and healthy because for the first time in 32 years no typhoon or heavy rain passed through the peninsula to damage the fields.

Thanks to the favorable weather conditions, consumer prices last month hit their lowest level in 14 years and inched up only 0.7 percent compared to last year. This has contributed to the significant drop in produce prices.

As a result, the wholesale price of cabbage, as of this week, has fallen from 2,221 won per cabbage last year to about 1,200 won.

Yet, even with the bountiful harvest, Chung and other farmers now face the problem of finding a buyer.

Here in Korea there are two popular means of trading cabbages. One is to sign a contract with a buyer. The farmer makes an agreement with a wholesaler around late July or early August.

The buyer gives between 30 percent and 50 percent of the total amount promised to the farmer.

Then they make the remaining payments once or twice more during Chuseok or at the end of October.

The problem is that in August, when the initial agreement was made, a 3.3-square-meter lot of cabbage was worth 5,000 won. But, because of the favorable weather conditions, the cabbage supply has been overproduced as of this month.

As a result, the average selling price of the cabbages has fallen 3,000 won.

“For the merchant it is a 2,000 won loss for each 3.3 square meters of the farm,” said Chang Hee-seong, fresh produce buyer at E-Mart. “The losses will further increase if they make the rest of the payment.”

The E-Mart buyer said purchasers can decide to break the contract to reduce their loss even if they have to give up on the contract payment they had made earlier.

There are no legal problems if the buyers break their agreement.

“Even the merchants who have already made between 50 [percent] to 70 percent of the agreed payment on neighboring farms are refusing to pay the rest of the payments as they say they are closely monitoring the price movement,” said the Gochang farmer.

The breakup of the contract causes financial losses for the cabbage farmers because more than 80 percent of the payment they receive only covers their costs. No profits are left.

For the Gochang farmer, the loss of the contract is a devastating blow because he received only 30 percent of the payment that was agreed upon, about 15 million won, which doesn’t even cover his expenses to raise the vegetable.

The other popular trading practice comes when merchants visit the farms around late September and October. The negotiation starts when the merchants see the produce on the field.

The merchants decide on the price and how much cabbage they plan on purchasing right off the farms based on the results of the harvest made on the high mountains of Gangwon, which is the first area in the nation to supply the produce.

If the harvest in the mountains of Gangwon is good and the price of cabbages is low, they don’t attempt to secure cabbages from other farms, which is what happened this year.

“The merchants have far better information on the harvest result than farmers,” said a buyer at a major retailer, who asked not to be named.

“If there is a sign that prices are going to go up, the merchants immediately look for farms to secure the supply, but when prices fall, as is the case this year, they tend to delay buying directly from the farm as much as possible.”

The buyer said this is because it is uncertain whether the additional secured cabbage will be sold. Also, there is a possibility that the cabbage price could fall further, therefore there is no need to rush to secure cabbage supplies.

“When prices of cabbages fall, the actual price when trading could be far less than 2,000 [won] to 3,000 won,” said Woo Young-moon, an official at Lotte Mart.

As merchants are holding off on their additional purchase of the produce, farmers are already worried about how they will get through the winter. “I might not be able to pay for the heating bill this winter,” said farmer Chung.

“If the situation goes on, there will be farms that will overhaul their field at the end of the month.”

Some of the farmers blame the situation on the government, saying it has mismanaged supply and demand.

In the last five years, cabbage prices have been on a roller-coaster ride; skyrocketing one year and then plunging the next.

“The government should well manage the amount of supply so that the product doesn’t flood the market or shrink all together,” said a farmer who requested anonymity.

“We have repeatedly made the request, but we have never seen it being realized.”

As the damage inflicted on farmers are expected to grow, the government, retailers and consumer groups alike are rolling up their sleeves to ease the situation.

The Ministry of Agriculture, Food and Rural Affairs announced on Friday that it has signed an agreement with a cabbage producers’ association, as well as consumer groups, on a retail agreement.

Under the agreement, Nonghyup, the nation’s agriculture cooperative, will not supply 30,000 tons of Napa cabbage to the retail market in order to prevent the price from falling further.

An additional 50,000 tons will not be supplied if the price continues to fall.

Meanwhile, farmers will be restrained from supplying low-quality goods while consumer groups will hold various consumption encouragement campaigns, including increasing the making of homemade kimchi.

“We also have plans of creating new demand by supplying kimchi to foreigners, the elderly living alone and other people who make have difficulty making their own kimchi,” said an official at the Agricultural Ministry.