Federer, Nadal to face off in ATP Finals

Federer, Nadal to face off in ATP Finals 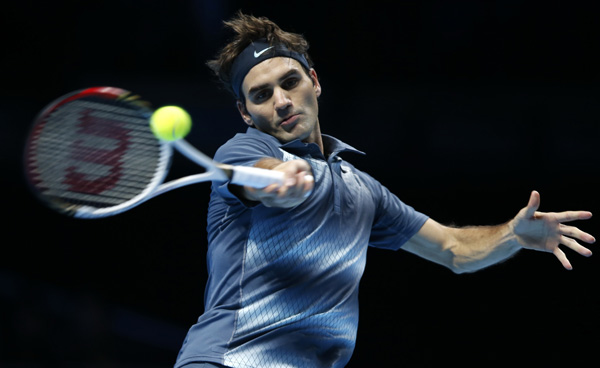 LONDON - Roger Federer isn’t the master of the game anymore, but he can still deliver when things matter.

On the back of a poor season, the 17-time Grand Slam winner showed that his winner instinct remained intact as he came back from 3-0 down in the third set to defeat Juan Martin del Potro, 4-6, 7-6 (2), 7-5 and reach the semifinals of the ATP World Tour Finals for an 11th time on Saturday.

More important than this impressive statistic, he has the chance to prove that despite his aging legs, aching back and recent lack of consistency, he can still beat his rival Rafael Nadal, his semifinal opponent.

“I just have to have the right mindset to give it one last go, maybe play with a little less pressure than I have in previous matches with him,” Federer said. “I just feel like I need to look at it more as being an underdog a little bit because of circumstances, because of my year, because of his year. Maybe that free swinging is what I kind of need to do a little bit more tomorrow.”

The 32-year-old Federer has endured a tough year and the elite event is his last chance to win a big title in 2013. Federer has just four victories against top-10 opponents in 2013 and has not beaten Nadal since 2012. The top-ranked Spaniard leads, 21-10, in their head-to-head record, but Federer is 4-0 on indoor hard courts, having secured all four wins at the ATP Finals.

Nadal, who returned to tennis in February after a seven-month layoff due to a knee injury, clinched the year-end No. 1 spot this week in a season in which he won the French Open and the U.S. Open. In London, the Spaniard qualified from his group unbeaten.

Novak Djokovic, who defeated Richard Gasquet, 7-6 (6), 4-6, 6-3 in his final round-robin match to extend his winning streak to 20 matches since his loss to Nadal in the U.S. Open final in September, will take on Stanislas Wawrinka in Sunday’s other semifinal.

This season, Federer has regularly lost to unseeded opponents and secured his qualification for the Finals at the last minute.

Both Federer and del Potro needed a win to progress from Group B and treated the crowd to a tense and entertaining back-and-forth match. Federer trailed in all three sets.

Only once in 12 appearances has Federer failed to advance to the last four at the season-ending tournament for the top eight players. He struggled to return del Potro’s big serve in the first set and committed seven forehand mistakes as his rival opened up a 5-1 lead.

Capitalizing on more Federer errors, del Potro broke again in the third game of the second set. The Argentine looked set for an easy win but failed to build on the momentum, double-faulting as Federer leveled at 3-3.

Federer then gradually took the upper hand with a brilliant display at the net and played a nearly perfect tiebreaker as del Potro crumbled. Federer clinched the set with an ace.