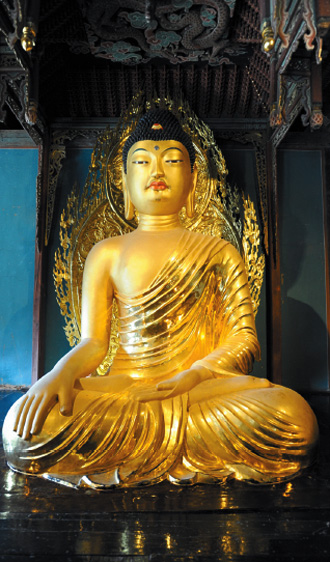 This statue of Buddha, measuring 2.78 meters (9.1 feet) in height, is enshrined in Muryangsujeon Hall in Buseok Temple, which is located in Yeongju, North Gyeongsang.

Called a sojo bulsang, this statue was made from a mold with clay and attached to a wooden structure. It is a very rare piece, the oldest and largest of its kind in the country.

This type of statuary - another example is the Seated Iron Vairocana Buddha of Dopian Temple - is believed to be from the early Goryeo Period (918-1392).

The rich face, thick lips and shapely nose create a solemn look. The robe covering just the left shoulders demonstrates tightly-positioned parallel lines. The position of the hands is one often seen in Buddha statues of the era, with the fingers of the right hand facing the earth.

The two hands of the statue today are apparently not the originals and were likely repaired some time in the Joseon Dynasty (1392-1910). As a work from the Goryeo Period, it is refined and elaborate.