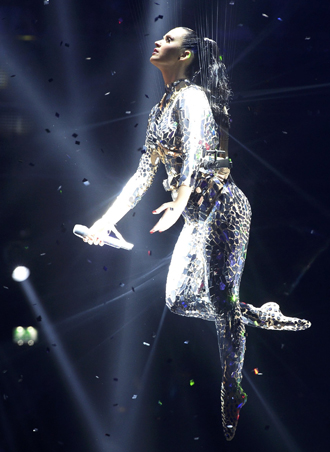 Singer Katy Perry performs during the 2013 MTV Europe Music Awards at the Ziggo Dome in Amsterdam on Sunday. [REUTERS/NEWS1]

AMSTERDAM - Katy Perry won the award for best female singer at the 2013 MTV EMA music awards on Sunday, pipping Lady Gaga and Miley Cyrus to the post in MTV’s first award ceremony since the launch a week ago of the upstart YouTube Music Awards.

But Cyrus stole the show by lighting what could have been a joint, in a nod to the host city’s famously tolerant attitude towards soft drugs.

She had earlier been photographed in one of Amsterdam’s best-known coffee shops, where soft drugs are on the menu.

With the three pop divas in contention, the prize for best female was the most closely watched battle at the Viacom-owned music network’s 20th annual European awards ceremony.

“It’s my goal to get (my music) to as many ears as possible,” she said on the red carpet before the show. “If that’s happening, I’m happy.”

When Cyrus picked up her best video award for “Wrecking Ball,” she made a show of not finding the space for the bauble in her handbag.

“You know I couldn’t fit this award in my bag but I did find this,” she said, pulling out a hand-rolled cigarette, which she lit as she walked off the stage.

Earlier, the former Disney star, who caused a sensation with her raunchy “twerking” performance with actor Robin Thicke at the U.S.-based Video Music Awards in August, took to the red carpet in a bold mini dress on which the words “Please Stop Violence” were wrapped tightly around her hip.

British-Irish boy band One Direction had a good night, taking the prize for best pop, while Harry Styles, known as much for his singing in the band as for his celebrity girlfriends, was awarded best style.

Thirty Seconds to Mars frontman Jared Leto reacted to his band’s winning the best alternative prize by calling for a minute of silence for those affected by typhoon Haiyan, which hit the Philippines on Friday, killing an estimated 10,000 people. The call went largely unheeded.

“It’s hard to hear in there .?.?. but the message is what’s important, to send some love and support across the world,” he said backstage afterward.

U.S. rapper Eminem was given a “Global Icon” prize for lifetime achievement along with best hip-hop, just a week after being declared artist of the year at the inaugural YouTube Music Awards, run by emerging music industry rival Google.

In the face of the new competition, the MTV EMA awards are being seen as a test of the ability of MTV, one of the most prominent brands of the 1980s and 1990s, to flourish in the Internet era. Reuters