Are Seokguram treasures at risk?

Are Seokguram treasures at risk?

Buddha’s statue in the Seokguram Grotto in Gyeongju, North Gyeongsang, has major damage, including: 1) a major crack on the platform; 2) peels; 3) cracks on the joints; 4) a 60-centimeter fissure.

About 100 objects from Korea’s Silla era (57 B.C.-A.D. 935) marked by sumptuous gold accessories and explicitly-portrayed clay dolls are part of an exhibition under way at the Metropolitan Museum of Art in New York.

The exhibition, titled “Silla: Korea’s Golden Kingdom,” is the first dedicated to the Silla era in the West and is running during the Met’s busiest season, Nov. 4 to Feb. 23.

Among the treasures from Silla, perhaps the most famous is the Seokguram Grotto, an eighth-century artificial stone cave that contains a Buddha statue and other Buddhist rock art. It is Korea’s National Treasure No. 24 as well as a Unesco World Cultural Heritage site.

The grotto - in Gyeongju, North Gyeongsang, the former capital of Silla - is not just famous but also one of the most beloved, often picked as the Korean cultural property that best demonstrates the ancient Koreans’ idea of the beauty of forms, and a Korean work that embodies architecture, mathematics, geometry, religion and art.

However, a recent JoongAng Ilbo investigation has found evidence of damage to the grotto, in particular to the principal statue of Buddha, the treasure’s jewel.

The principal statue of Buddha is at the center of the cave, which was built with white granite halfway down Mount Toham. Thirty-nine images of Buddhist monks, disciples and guardians are carved into the surrounding walls.

The JoongAng Ilbo got an exclusive look inside the grotto after receiving permission from the Cultural Heritage Administration (CHA), the first time this has happened since 1976, when authorities erected a glass barricade to prevent damage. Since then, only cultural property experts have entered the grotto once or twice a year.

Experts accompanied our surveys, which took place on Nov. 2 and 7, each lasting 20 minutes. We found at least 20 cracks on the statue and the rock art.

We were also able to obtain a 2012 CHA report on Seokguram, which details 56 “defects” in the grotto, including 25 on Buddha’s statue, three on the ceiling and six on the side pillars. The report is released every year, but it is for internal use only.

Our investigation found that the cracks were mostly evident on the pedestal on which the principal statue of Buddha is placed, displaying structural instability.

In particular, we saw a one-meter (39-inch) vertical crack on the pedestal below Buddha’s left knee, splitting the 50-centimeter-thick pedestal in half. Also, two small pillars supporting the pedestal from below had cracks on the joints, one of which showed signs of a twist.

“This part [the pedestal] is the most problematic as it’s where the weight is concentrated,” said Lee Su-gon, a rock expert and engineering professor at the University of Seoul, adding that “oftentimes vertical crevices lead to horizontal crevices.” He said that if the cracks worsen, Buddha’s statue could eventually collapse.

Kim Deok-mun, a researcher at the National Research Institute of Cultural Property, said that cracks appear to have occurred “as the grains of the stone aren’t consistent, which could cause problems in expansion and contraction.”

Kim said: “If the cracks occurred recently, the inside would be relatively clean. But they appear to have formed some time ago, given that all of them have quite a lot of dust.”

The CHA’s report raised a red flag about the cracks on the pedestal below Buddha’s left knee, saying that “there needs to be a close observation to see if the cracks are progressive.” It also said: “We had an endoscope in between the Buddha’s statue and the pedestal and found that they meet only on the periphery, which causes the distribution of weight concentration to be uneven. We need to find out if there is any correlation between that and the cracks.”

The CHA’s stance is that “the survey with the naked eye has found that there isn’t a conspicuous change this year compared to the last year.” 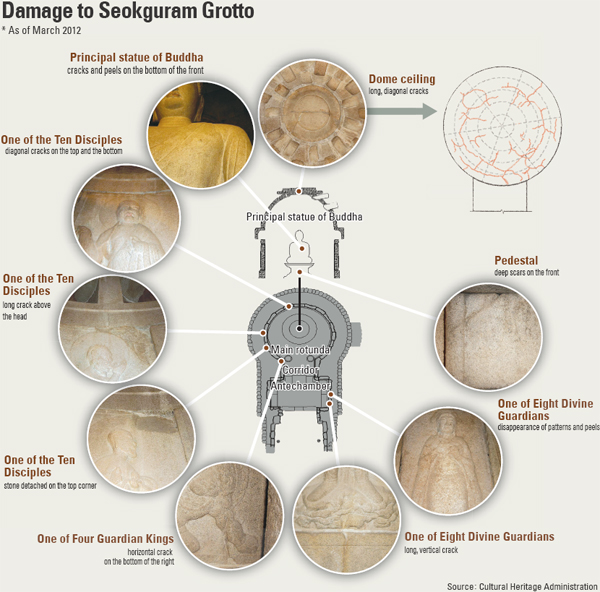 So how are experts viewing the current status of the Seokguram Grotto?

We asked for insights from two experts: Lee from the University of Seoul and Kim from the National Research Institute of Cultural Property. (Because the CHA has been reluctant to share its report with outsiders and because there are few experts in this specific field, finding experts was difficult.)

While Lee is saying that the Seokguram is definitely at risk, Kim is saying we should wait and see.

Lee said that because Buddha’s statue in the Seokguram has a rare design that consists of the statue, a platform and “legs” that support the platform, it’s true that it isn’t easy to assess its condition. The surface of the statue is also uneven as it’s made of stone that was cut with chisels, which makes the distribution of weight uneven.

Still, he says: “The cracks on the pedestal below Buddha’s left knee and twists on the pillars under are early signs of destruction. You never know when one of the pillars will break and the statue will collapse. What’s worrisome is that the CHA’s crack gauge is a rudimentary one. It is an inappropriate measure.”

Lee also said that once they collapse, stone monuments can rarely be restored - unlike wooden ones. And he used the case of the eighth-century Three-Storied Stone Pagoda in the Bulguk Temple in Gyeongju. The 8.2-meter (27-foot) pagoda, better known among Koreans as Seokgatap, is Korea’s National Treasure No. 21.

“Concerns of the pagoda’s safety were first raised in 1995. In 2005, authorities spotted cracks in the base stone. But as they spotted no big change in ensuing years, in 2010 they removed a measuring system that they installed there. But six months after that, a large fissure was spotted, which led them to the ongoing, wholesale restoration,” Lee said.

He emphasized, “The lesson the case taught us is that we shouldn’t just watch the cracks of stone artifacts and do nothing.”

Kim was on the same page with Lee in that stone monuments are different from wooden ones. “No matter how precisely you manufacture the stone, the top stone and the bottom stone don’t perfectly interlock, and the area of contact is never 100 percent,” he said.

But he also said that he believes some of the crevices go back to the very early years of the Seokguram and that he is not sure if we should conclude that they are still progressing.

However, Kim also pointed out some of the realistic problems facing the CHA: “There are only two people at the National Research Institute of Cultural Property who specialize in the safety [of the Seokguram]. Securing enough personnel and a budget is a priority.”

As stated in CHA’s report, the areas around the principal statue of Buddha in the Seokguram Grotto are also at risk. After all, of the 56 “defects” in the report, 31 are in areas other than Buddha’s statue.

Looking at the ceilings first, we were able to spot a y-shaped fissure. Experts said that it occurred while the Japanese restored the cave between 1912 and 1915, during the 1910-45 Japanese colonial rule of Korea, and discoloring was taking place.

The walls where the Four Devas, or the four heavenly guardians of Buddhism, and disciples are carved also showed fissures and damage here and there. In some areas, we were able to see parts of the stone coming off, exfoliating and discoloring.

Monk Seongman, one of the monks overseeing the grotto, said that “some parts have weakened to the point where even a light rub would cause parts of the stone to come off.” On the dome inside of the cave, we also spotted leaking water. Kim of the National Research Institute of Cultural Property said that water leaks began when Japan restored the grotto improperly, using plain concrete.

In response to the JoongAng Ilbo’s published report of its investigation, the CHA released a statement Friday night, saying that it will come up with better safety measures for the grotto after an in-depth scientific investigation of its own.

“The National Research Institute of Cultural Property has been holding a regular safety checkup of the cracks, weathering and discoloring of the interior and exterior of the Seokguram Grotto two or three times a year since 1966,” it said. “The matters raised by a certain media outlet [the JoongAng Ilbo] require further investigation by the National Research Institute of Cultural Property and some other expert groups.”

Meanwhile, Monk Seongta, the chief monk of Bulguk Temple, has been calling to make a replica of the Seokguram. (Seokguram is near the temple and the two are listed together as World Cultural Heritage sites.) “We wanted to construct a twin grotto nearby, but our attempts failed due to protests from environmental activists as well as lack of a budget,” said Monk Seongta, adding that “it’s still not too late to review such a proposal.”