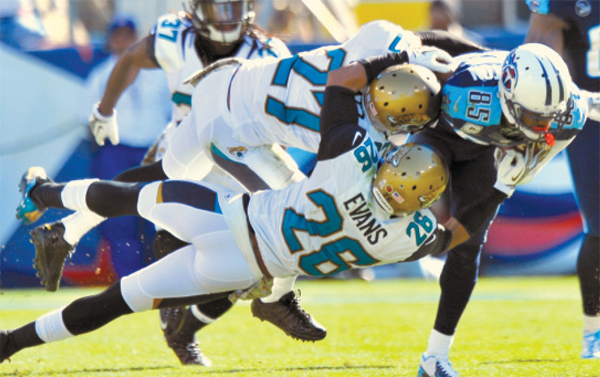 The Jacksonville Jaguars pulled off the Week 10 shocker upsetting the Tennessee Titans 29-27 to collect their first win of the season on Sunday to leave the Tampa Bay Buccaneers as the NFL’s only winless team.

While the victory by the Jaguars (1-8) was the big surprise, the St. Louis Rams’ 38-8 demolition of the Indianapolis Colts ranked a close second on another wild Sunday filled with Hail Mary passes and plenty of last-second drama.

The Seattle Seahawks (9-1) kept a firm hold on the top spot in the West, thumping the Falcons 33-10 in Atlanta, while the New York Giants (3-6) moved back into the playoff chase in the NFC East, running their win streak to three games with a 24-20 victory over the Oakland Raiders (3-6)

A dismal season that had seen the Jaguars outscored 86-264 finally produced a bright moment as Maurice Jones-Drew and Jordan Todman each ran for a touchdown to help Jacksonville to a long awaited win.

There was nothing pretty about the Jaguars’ performance as quarterback Chad Henne completed just 14 passes for 180 yards with no touchdowns and two interceptions.

But the Jacksonville defense came through when needed most, recording a safety early in the fourth quarter then recovering a fumble and returning it 21 yards for the winning points with just over two minutes remaining.

Matthew Stafford tossed three touchdowns, including a pair to All-Pro receiver Calvin Johnson, but it was the Detroit defense that sealed the win, stopping the Bears two-point conversion attempt with 40 seconds left on the clock.

With Aaron Rodgers out with a broken collarbone, Seneca Wallace got the start for the Packers, but before the end of the first quarter Green Bay was down to third string Scott Tolzien after Wallace was forced out of the game with a groin injury.