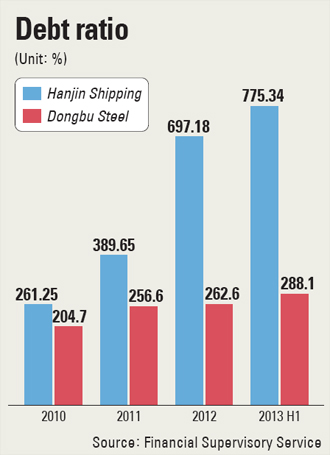 Kim Young-min, chief executive of Hanjin Shipping, tendered his resignation yesterday at a time when the country’s largest shipper is struggling with a liquidity shortage and a sluggish economy.

Kim, who joined Hanjin Shipping in 2001 after 20 years at Citigroup, will remain in his position until a replacement is found, but the 58-year-old executive will not complete his term, which ends in March 2015.

There has been criticism of Kim’s handling of the company’s finances from within the industry. Kim became chief executive in 2009. Just like other shippers in Korea - including Hyundai Merchant Marine and STX Pan Ocean - Hanjin Shipping has suffered from a cash shortage mainly due to the global economic slump, rising oil costs and an oversupply of ships.

The company was in the red for three straight years since 2010 and analysts forecast that third-quarter performance will be mediocre.

According to industry insiders, Hanjin Shipping has about 220 billion won ($205 million) worth of commercial paper maturing this year with the company facing nearly 400 billion won worth of debt that is due next year.

As part of efforts to ease the liquidity crunch, the shipper sold major assets like cranes, vessels and other facilities in a Busan port earlier this year. Last month, it also received a 150 billion won cash injection from its affiliate Korean Air Lines, which is the largest shareholder of Hanjin Shipping’s parent Hanjin Shipping Holdings. They are all part of the Hanjin Group, chaired by Cho Yang-ho.

Korean Air is currently going through due diligence on the shipper to assess whether the company can repay its debt.

Apart from Korean Air’s support, Hanjin Shipping has been planning to issue 400 billion won in perpetual bonds - which are extremely long-term bonds with no maturity date - to raise more funds, and is reportedly asking creditors including Korea Development Bank, Hana Bank and Woori Bank to guarantee payment.

Industry insiders have said that with Korean Air’s financial support, conditions have become more favorable for the shipping company to be guaranteed an OK from the financial sector.

While the shipping company is working on its own to stave off bankruptcy, the country’s financial regulator also has rolled up its sleeves to prevent the shipper from collapsing, which would negatively affect creditors’ asset soundness.

According to financial sources yesterday, the country’s financial regulator will keep a closer watch on Hanjin Group and Dongbu Group so that they avoid bankruptcy and improve their financial position.

“The conditions for these two groups to carry out their businesses have become extremely difficult because of the lingering bad economy, and we decided to monitor [both] closely, especially Hanjin and Dongbu,” said an official from the Financial Supervisory Service. “The move is all part of our efforts to make sure that the financial sheets of leading companies are sound, especially those in economy-sensitive industries like shipbuilding, shipping and construction.”

Hanjin Group and Dongbu Group are two of the 30 conglomerates that have been identified by the Financial Services Commission this year as primary debtors. Primary debtors are selected by the FSC every year if the total amount of their bank loans is equivalent to or more than 0.1 percent of a financial institution’s total lending.

If selected, they are closely watched by creditor banks and given instructions to help reduce their debts.

Last week, the FSC said it will expand its watch list and include conglomerates on the prime debtors list if the amount of loans they received is equivalent to or more than 0.075 percent of a bank’s total lending.

The FSC also said that conglomerates refusing to follow creditor banks’ instructions will face replacement of management or interest rate increases for loans they received. Financial sources said yesterday that the changes will be applied for Hanjin and Dongbu groups immediately.