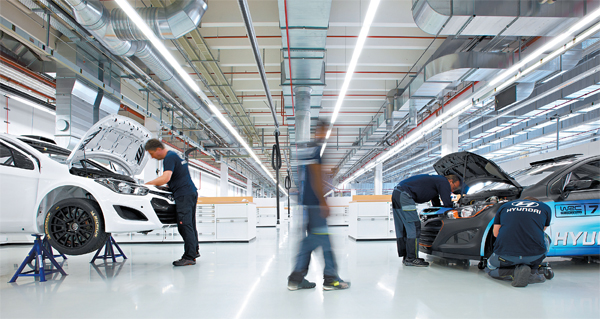 Employees work at the Hyundai Motorsport facility in Alzenau, Germany. Hyundai is considering introducing a high-performance brand that would highlight the company’s racing technology. Provided by the company

Korea’s top automaker Hyundai Motor is set to introduce a performance subbrand to highlight the company’s return to the World Rally Championship (WRC) series next year.

Yang Seung-wook, vice president of the Hyundai Motor Europe Technical Center in Russelsheim, Germany, said last week a name has been given to the performance brand, but it has not been decided when it will be introduced.

“We are considering implementing technologies used in WRC rally cars in mass-produced vehicles,” Yang said. “By participating in the WRC, we can show consumers that Hyundai has such technology.”

Some officials from Hyundai Motor Europe said introducing a performance line is just one idea to improve its brand image, but it has not officially confirmed the idea. However, industry insiders speculate it is just a matter of time.

Other automakers have their own performance subbrands. Mercedes-Benz has AMG, while BMW uses M to identify its performance cars. Audi has S or RS models, while Chrysler goes with SRT and Nissan with Nismo.

Hyundai officially opened its motorsport headquarters in Alzenau, Germany, in June and has been preparing to participate in the Monte Carlo Rally in January. Last week, it announced that Thierry Neuville of Belgium will be its first driver.

“Everyone is pushing hard to participate in the WRC Monte Carlo next year, and it will not be a problem for us to meet the schedule,” said Stefan Henrich, director of marketing and public relations at Hyundai Motorsport.

Hyundai said technologies and specifications used in the WRC car could be applied to its other vehicles, but mass production is a different issue.

If the automaker rolls out high-performance cars, the i20 subcompact is likely to be the top candidate because the WRC car is based on that model.

The i20 WRC rally car is equipped with a 1,600-cc turbocharged engine that can produce 300 horsepower. It also has an all-wheel-drive system and a six-speed sequential gearbox.

“Before we decided to make a rally car, we examined other Hyundai models, and there is a reason why the i20 was chosen,“ said Leem Mooyong, administrator director at Hyundai Motorsport.

Hyundai withdrew from the WRC in 2003 after a three-year stint in the premier class with its Accent-based car. It will host a ceremony for its official WRC team next month.