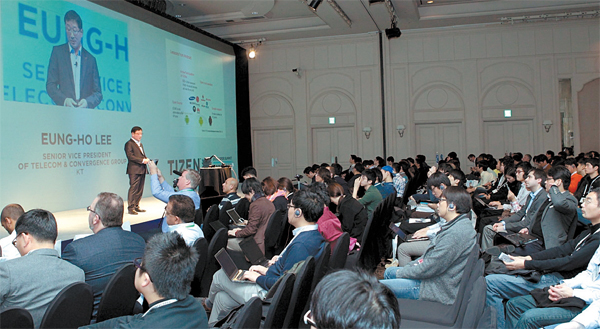 Taking to the stage at the Ritz-Carlton Hotel in Gangnam, Samsung Electronics Executive Vice President Choi Jong-deok clicked on an app installed on his smartphone.

As the camera projected the phone live on a large screen on the wall, a 3-D racing car game was launched and Choi drove it past a variety of obstacles without stopping for buffering.

The game running on Tizen, an operating system developed under the leadership of Samsung Electronics and Intel, drew a positive reaction from hundreds of participants. “The performance of the app run Tizen is so vivid and real,” Choi said. “The ecosystem of the apps is growing up well.”

Tizen, which many expect could be a strong challenger to Google’s Android or Apple’s iOS, is taking shape. The two companies began the two-day Tizen Developer Conference 2013 in Seoul yesterday. It is the first Tizen summit in Asia since the operating system was unveiled at the Mobile World Congress in February. Two Tizen summits were held in San Francisco in May.

The Tizen Association is composed of 10 board members. Apart from Samsung and Intel, eight companies - including KT, SK Telecom, NTT DoCoMo of Japan and China’s Huawei - are participating as board members. Thirty-six companies are partners in the association.

Samsung, which has a vast range of electronics products, stands to benefit most. Tizen is expected to be a cross-product platform, which can be applied to smartphones, televisions and refrigerators, among others.

Android, which Samsung currently depends on, had an 81.3 percent market share in smartphones in the third quarter, according to Strategy Analytics, up from 75 percent a year earlier. Apple’s iOS followed with 13.4 percent.

Samsung has tried to have its own ecosystem capable of connecting every product it makes. It proved to be challenging. Samsung’s efforts to build its mobile-focused operating system, Bada, since 2011, fizzled out after the market dismissed it as exclusively for Samsung.

Tizen could prove different, Samsung officials said. “We have been running the Tizen Store since May, and already more than 4,000 app sellers have registered,” said Choi.

During the summit, member companies unveiled Tizen 3.0, the latest version which upgraded key functions from version 2.1.1. The 3.0 adopts a 3-D user interface.

The expectation is that Samsung will release a Tizen smartphone or TV early next year. “We can’t say for sure the concrete day of release, but a Tizen phone will be unveiled soon,” Choi said.

Lee Eung-ho, a vice president of KT, said Google’s success should be a wake-up call for Tizen.

“Google Play has seized a dominant position in the app store market, but its focus has been limited to popular apps,” said Lee. “It is because Google, which succeeded with an open-source policy, has lost much of its diversity and openness.”

“If we go forward with an open-door operating system that draws many developers .?.?. I think Tizen will be a robust ecosystem.”

Choi, who is a cochair of Tizen’s Technical Steering Group, confirmed a swirling rumor among developers that Samsung’s latest mirrorless camera, NX 300M, was built on Tizen 1.0. It is the first product in Korea with a Tizen operating system.