DP abandons its tent home and returns to Assembly

DP abandons its tent home and returns to Assembly 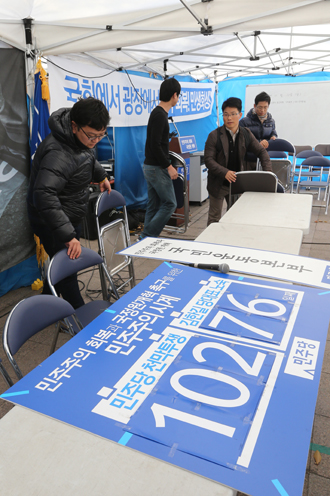 Officials of the Democratic Party pull down a makeshift tent yesterday that was set up in front of Seoul City Hall, which has been used as party headquarters since Aug. 1. [NEWS1]

Wrapping up its 101 days of street protests, the largest opposition party returned to the legislature yesterday for more challenges to the Park Geun-hye administration and the Saenuri Party by joining hands with civic groups and other liberal politicians.

“Our street protests could not resolve the situation,” Lee Yong-deuk, a member of the Supreme Council of the Democratic Party, said yesterday at a press conference at the National Assembly. “We will transform our fight by cooperating with religious and civic groups.”

Lee said the Democrats will create a joint conference with members of liberal civic groups and the religious community to be formally launched tomorrow. “The Democratic Party will hand over our struggle to this joint conference and participate in its expanded efforts to restore democracy and reform the National Intelligence Service.”

The Democratic Party built a tent at Seoul Plaza and moved the party headquarters there on Aug. 1 to protest the Park government and the ruling party’s indifference to the scandal over the national spy agency’s alleged smear campaign against its candidate in last year’s presidential election.

“Although we are removing the tent now, the spirit of comradeship that we built inside the tent will stay alive,” Lee said. “Depending on how the situation goes, we can go back to the tent again.”

Lee also credited the Democrats’ tent protest for having made the public aware of the National Intelligence Service’s disinformation campaign during last year’s campaign.

“The protest built the foundation for a national liberal alliance to restore democracy and reform the National Intelligence Service,” Lee said.

The opposition Justice Party and Representative Ahn Cheol-soo, an independent lawmaker and former presidential hopeful, are also to join the alliance with the Democrats.

As the Democrats leave the street, they plan to strengthen their offensives against the ruling Saenuri Party inside the National Assembly. Representative Kim Kwan-young, spokesman of the DP, said yesterday they will pressure the ruling party to appoint an independent counsel to investigate the election campaign scandal and create a special National Assembly committee to reform the NIS.

Confirmation hearings for Park’s nominees to head the Board of Audit and Inspection, Ministry of Health and Welfare and prosecution office scheduled for this week are expected to be another battleground. Because all three appointments were made after their predecessors stepped down in the aftermaths of political scandals, the legislators are expected to vet their professional capabilities and their political stripes. The Saenuri Party said yesterday it was unfortunate that the Democrats emphasized their zeal to fight rather than focus on legislation.

“What the Democrats need is not a liberal alliance to continue their fight,” said Representative Yoo Il-ho, spokesman of the party. “It doesn’t have enough time to fulfill its responsibility as the largest opposition party to serve the people, but it is once again relying on a liberal alliance after it failed to stand alone. I feel sorry to see the DP choosing a path to ignore the people’s living standards.”

Yoo urged the DP to have constructive discussions and come up with pragmatic bills to improve the people’s lives and approve next year’s budget before the deadline.

Meanwhile, the Unified Progressive Party, which the Park administration is trying to legally dissolve because of its alleged ties with North Korea, took over the place at Seoul Plaza that the Democrats vacated.

Following rallies over the weekend, the UPP decided to build a tent at Seoul Plaza to continue a daily protest.