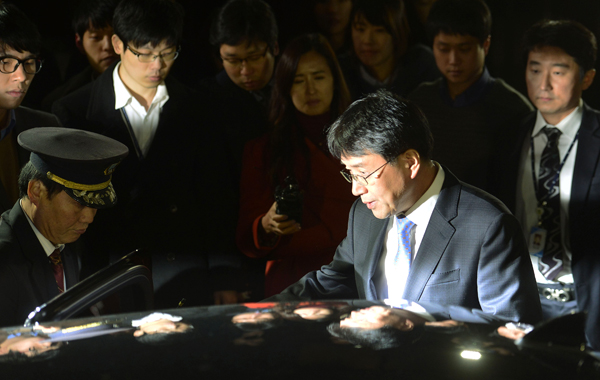 Cho Young-kon, head of the Seoul Central District Prosecutors’ Office, leaves the office yesterday evening after he tendered his resignation despite the official announcement that he did nothing wrong. [NEWSIS]

A senior prosecutor accused of exerting political pressure on a junior prosecutor investigating the spy agency’s election interference scandal tendered his resignation yesterday despite the prosecution’s official announcement that he did nothing wrong.

Cho Young-kon, head of the Seoul Central District Prosecutors’ Office, released a statement yesterday saying he was stepping down.

“I feel really sorry for causing deep concern about this scandal,” Cho said in the statement. “I once again clarify that I have never committed an act against the law or my conscience while I was the head of the office, and all of the allegations regarding the so-called external pressure … were not true.”

Cho’s resignation came less than an hour after a junior prosecutor faced suspension for refusing to follow his directions of ordering arrests of National Intelligence Service agents outside the chain of command.

The Supreme Prosecutors’ Office, the nation’s top prosecution organization, yesterday announced its decision to ask the Ministry of Justice to punish Yun Seok-yeol, the junior prosecutor who was in charge of looking into whether the NIS ran an online smear campaign against the opposition candidate in last year’s presidential election. The top prosecution office suspended Yun, but didn’t announce the length of the suspension.

On Oct. 21, Yun dropped a bombshell by telling lawmakers in a hearing that there was “external pressure” when he was leading the probe. He said he reported his plan to arrest the NIS agents and raid their offices to his boss, Cho, but Cho protested, citing political reasons.

Cho later denied Yun’s accusations and said he only told him that he would think about the plan.

According to the law, NIS agents cannot be arrested - even with a warrant - unless the prosecution or the police notify the NIS chief in advance. Under the chain of command in the NIS probe, Yun was required to inform Cho about the plan and Cho would alert the Supreme Public Prosecutors’ Office and the Ministry of Justice before they reported it to the NIS chief.

Without Cho’s approval, Yun made a unilateral decision to raid the houses of four NIS agents on Oct. 16 and arrest three of them. Through the investigation into the four agents, he also revised the indictment against former NIS chief Won Sei-hoon, adding additional charges against him, which Cho also did not approve.

The prosecution decided Yun defied the orders and broke the chain of command.

“We concluded it was right to give a suspension to Yun, considering his illegal acts such as insubordination to his boss’s directions in requesting arrest warrants [against NIS agents] and revising the indictment,” Lee Jun-ho, an official at the Supreme Prosecutors’ Office, told reporters yesterday at a briefing. The prosecution did not punish Cho.

“Cho just delayed his decision on the arrest because he concluded they needed to take legal steps to do that,” Lee said.

The prosecution also said that they could not reveal the truth about whether Cho indeed pressured Yun not to arrest the NIS agents because of political reasons.

Allegedly, at a private dinner, Cho told Yun, “If we arrest the NIS agents, it would help the [opposition] Democratic Party,” and “Do that [arrest them] after I resign.”

Cho said he felt responsible for the punishment against Yun, which is why he resigned.

“I could not stay in my post while the junior prosecutors under my control have been punished,” Cho said. “I’m leaving my job to take full responsibility for this case.”