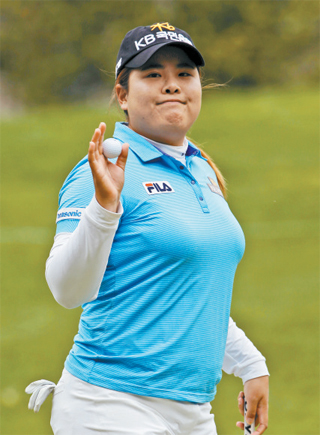 The world’s No. 1 female golfer, Park In-bee, is going through her toughest challenge of the season as she tries to secure the Rolex Player of the Year award.

The 24-year-old Park will face Suzann Pettersen of Norway at the LPGA’s Lorena Ochoa Invitational, which tees off tomorrow local time at the Guadalajara golf club in Mexico. The tournament continues until Sunday.

Park is still the world No. 1 with 11.98 points, but Pettersen has chased her down and now trails by only 0.63 points.

The two women battled each other about a month ago in the LPGA Hana-KEB Championship, which was held in Incheon, but neither was really in serious contention for the top spot in that event. Park finished tied for 28th while Pettersen tied for third.

But then, Pettersen won the 2013 Sunrise LGPA Taiwan Championship in late October, propelling her up the standings to right behind Park.

Park is also atop the year’s prize money list with $2.34 million, but that gap has been closing, with Pettersen having now earned $2.24 million.

With the championship prize money for the Ochoa Invitation amounting to $200,000, and the winner at the CME Titleholders Championship, the final LPGA tournament of the season, getting $500,000, the top money winner of the year is still up for grabs.

Park finished last year’s Ochoa Invitational tied for second, losing to Cristie Kerr of the United States in the final round after spending much of the event in first place.

Only 39 players will compete in the event. Other Koreans invited include Ryu So-yeon, who is the world’s No. 5, and 22-year-old Choi Un-jung. Also in Guadalajara will be the United States’ Stacy Lewis, world No. 3, and New Zealand’s Lydia Ko, world No. 4.

It has been a remarkable year for Park, with six victories - one more than Hall of Famer Pak Se-ri ever won in a single year. Pak had two five-win years, in 2001 and 2002.

By winning the U.S. Open in June, Park became the first golfer since 1946 to win three straight major tournaments. She had been going for a “Calendar Grand Slam,” by winning four major tournaments in one year, but has struggled since then. In early August, Park failed in her attempt at her fourth straight major, finishing tied for 42nd at the Ricoh Women’s British Open.