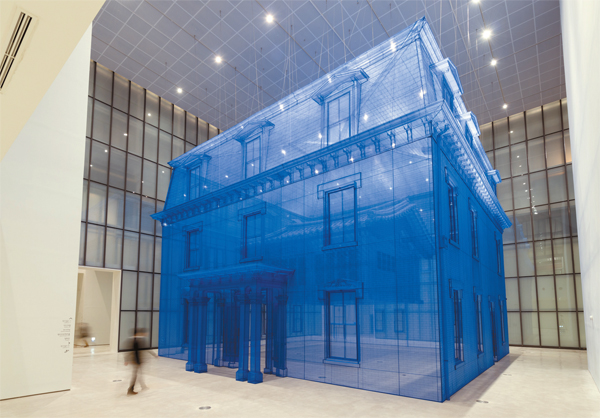 Do Ho Suh’s phantom-like re-creation of his past Korean and American houses, using layers of translucent fabric, fills the Seoul Box, a 17-meter-high (55-foot-high) space in the National Museum of Modern and Contemporary Art’s new Seoul branch, aka MMCA Seoul.

From the high ceiling of a lobby near the Seoul Box is hanging U-Ram Choe’s giant kinetic artwork “Opertus Lunula Umbra,” which means “Hidden Shadow of the Moon” in Latin. The coils covering the sculpture, which can remind viewers of a crescent moon, a Viking ship or larva, move smoothly like breathing.

The nearby exhibition room displays fast-changing video images on the walls, with text passages in big type by the media artist group Young-Hae Chang Heavy Industries.

Together, these make up the “Site-Specific Art Project,” one of the five inaugural exhibitions at the MMCA Seoul, which opens to the public today.

“The title refers to both my Korean and American homes, as well as to the museum itself, the former palace complex it now inhabits, and the city of Seoul,” Suh said during a press preview on Monday.

The MMCA Seoul was set up on the site of a government office complex from the Joseon period (1392-1910), once attached to the Gyeongbok Palace. The site went through several changes during a turbulent time in Korean history. So the museum, designed by architect Mihn Hyun-jun, includes a combination of new and old buildings. Among the old, there is the Joseon-era Office of Royal Genealogy, or Jongchinbu, and the red-brick building of the former Defense Security Command headquarters.

Gyeongbok Palace now lies directly to the west, and the famous neighborhoods of Samcheong-dong and Bukchon border the museum on the north and east. Mihn designed the museum’s low-rise web of buildings, underground spaces and courtyards to link flexibly with the old neighborhoods, calling it “an open museum in the style of an archipelago.” The courtyards smoothly spill out into the spaces that surround the museum.

“It is hard to find another museum like this, in terms of the surroundings and accessibility,” said Suh, one of the best-known Korean artist in the international art scene. “Even in other countries, there are a few museums that can be directly accessed from the street in the heart of downtown. This museum will be a good platform for Korean contemporary art.”

Now the question is what pieces will fill the art museum. For its first answer, the museum presents five inaugural exhibitions featuring about 70 artists.

One of those exhibits, the “Connecting-Unfolding” show, encompasses both conceptual works in which ideas and interactions with viewers take precedence over visual impact, and works with strong visual and sensory impact explore the boundaries of fine art and the meaning of art in our daily life.

For the show, seven influential curators from around the world - including Richard Flood from the United States, Ann Gallagher from the United Kingdom and Pooja Sood from India - selected seven artists, including Korean artist Yang Min-ha, Taiwanese artist Lee Mingwei and British artist Tacita Dean.

“The Aleph Project” questions the boundaries of art through works made by the collaboration of artists, architects and scientists.

And the “Zeitgeist Korea” exhibition shows a cross section of not only Korea’s contemporary art, but also its contemporary society with works from the MMCA’s collection.

Admission to the inaugural exhibitions in a package is 7,000 won ($6.52) for adults. Until the end of this month, the museum will operate an online reservation system on its website (www.mmca.go.kr) as it expects a rush of visitors. Museum attendance will be limited to 500 people per hour - 250 from online reservations and 250 from tickets sold at the door.