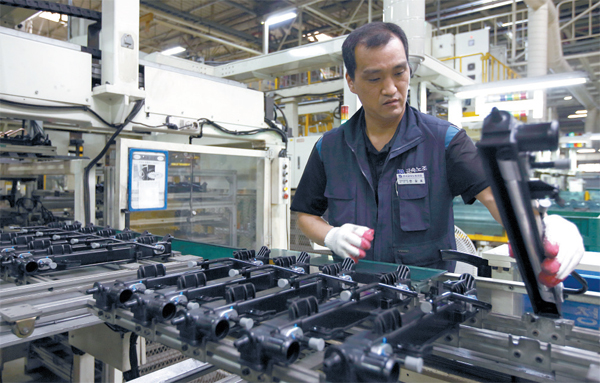 An employee of Halla Visteon Climate Control Corp. works on an assembly machine recently in Daejeon. The company is the world’s second-largest manufacturer of car heaters and air conditioners and one of the many reasons why Korea’s exports have been strong. [BLOOMBERG]

Korea is likely to obtain its largest-ever current account surplus of $69 billion this year, but that will shrink to about $51 billion next year, a government report said yesterday.

According to the state-run think tank Korea Development Institute (KDI), the country is expected to surpass the previous record it set last year by more than $20 billion. It also will exceed the Bank of Korea’s initial goal of $63 billion.?

The country saw an expanding current account surplus through the third quarter this year despite adverse external conditions for the export-reliant economy.

As of the third quarter, the surplus hit $48.8 billion, accounting for 5.7 percent of the gross domestic product.

The percentage of current account surplus to GDP is the highest since 1998, the report said.

The current account balance marked its 20th consecutive monthly surplus in September as it reached $6.6 billion, according to the central bank.

The central bank, however, denied that last month’s current account surplus was achieved only by a sharp drop in imports.

But next year, as the domestic market is likely to recover, the surplus could shrink, the report estimated.

“It would be natural to see Korea’s current account surplus decrease next year, and it doesn’t need to react sensitively to the decrease next year,” said Chung Kyu-cheol, an author of the report. “The current account balance is an indicator that shows the difference between what we earn outside and inside, which means the greater the surplus, the more the domestic market is contracted.”

This year alone, about $8.9 billion was added to the surplus due to the sluggish domestic market, the report said.

The country is expect to achieve a surplus of $45 billion?to $56 billion in current account next year, the report projected.

It said next year’s figure is based on global trade volume increasing about 5 percent, while conditions for trade would be tougher than this year due to expected appreciation of the Korean currency.