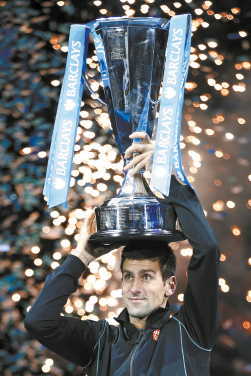 LONDON - The message from Novak Djokovic could not have been more emphatic as he retained his title at the ATP World Tour Finals on Monday with a crushing victory over Rafael Nadal.

Nadal deservedly ends the year as the world No. 1 after an incredible comeback from injury but the way the Serb ran him ragged in a 6-3, 6-4 victory at the O2 Arena was an ominous smoke signal ahead of next year.

Djokovic provided a one hour, 36 minute master class in power and precision and if anything the score line flattered Nadal, who spent most of the match dancing to his opponent’s tune.

After a week of sellout crowds at the spectacular London arena alongside the River Thames it was appropriate that the world’s two best players should meet for a 39th time - the most of any modern-day rivalry.

Both players had won all their round-robin matches before cruising through Sunday’s semifinals.

Nadal was bidding to land the title for the first time to cap a year that saw him roar back to the top of the rankings with 10 titles, while Djokovic was finishing the season like a steamroller, winning 21 successive matches since losing to the Spaniard in the U.S. Open final.

Apart from a few jaw-dropping rallies, however, the fireworks were confined to those that lit up the court as Djokovic got his hands on the trophy named in honor of the late ATP executive chairman, Brad Drewett, who died this year.

“I think at the beginning he was playing much better than me, the first three games no doubt,” Nadal said. “After that I didn’t see the difference.”

The statistics offered a clue, however.

Djokovic hit 19 winners to Nadal’s nine, committed less errors and served much better than his opponent, who threw in some costly double faults when he was broken early in the second set.

Djokovic dominated virtually from start to finish and despite the 17,000 crowd willing Nadal to drag the match into a decider, he was powerless to fight off an opponent who peppered the lines with relentless accuracy.

The Serb, who ceded the top spot to Nadal in October, began the final as if he had a point to prove.

Playing immaculate tennis, Djokovic raced to a 3-0 lead as Nadal struggled for timing.

Nadal finally began to get on the front foot and won the next three games as Djokovic’s level dipped briefly.

Djokovic edged in front again and broke serve with one of the points of the tournament, a spellbinding rally in which he sprinted across the baseline to produce an inch-perfect lob before stealing in to the net and winning a quick exchange of volleys before raising his fists to the crowd. Having taken the opening set, some uncharacteristic errors from Nadal allowed Djokovic to seize complete control early in the second. Reuters