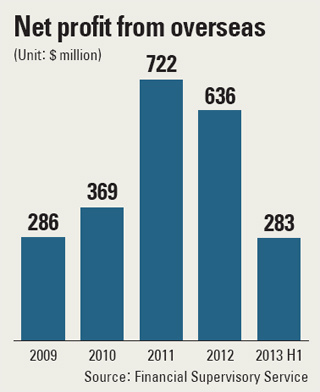 Although Korean financial institutions expanded their overseas business this year by opening up new branches and offices, earnings have lagged, according to data from the Financial Supervisory Service yesterday.

According to FSS data, the number of local banks’ overseas operations in Asia has been rising since 2011, when there were 85 offices and branches at the end of the year. The figure jumped to 94 the following year over the same period and 98 at the end of June.

The number of operations in North America and Europe, meanwhile, dropped slightly over the same period.

Despite local financial institutions’ aggressive expansion overseas - particularly in Asia - in recent years, earnings have been held down by low interest rates worldwide. According to the FSS, in the first half of this year, the net earnings of the 148 overseas operations reached $282.7 million, down 14.5 percent from $330.6 million in the first half of last year.

“Global interest rates have continuously dropped, which led local banks to see a decline in their net interest margin and eventually their interest income,” said an official from the FSS. “With a drop in net income, their return-on-asset ratio also declined.”

“Local banks lag behind in terms of global competitiveness and they lack know-how in carrying out overseas businesses, which makes it even more difficult for them to successfully enter foreign markets,” said Lee Ki-youn, deputy governor at the FSS. “As for us [the financial regulator], we will enhance our cooperation with local financial regulators so Korean banks are able to more easily receive business approvals.”