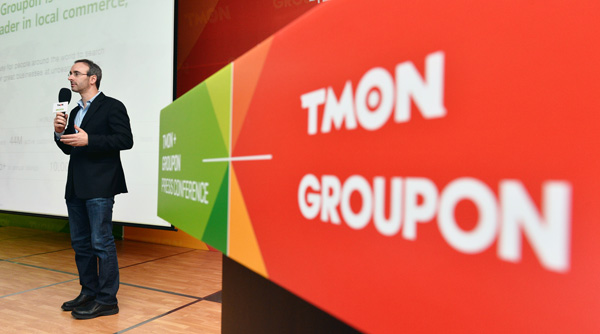 Eric Lefkofsky, the founder and CEO of the world’s largest social-commerce company, said at a press conference yesterday that Groupon purchased the Korean e-commerce site Ticket Monster both to turn Ticket Monster into the Korean leader and to strengthen Groupon’s position in the Asian market.

Lefkofsky co-founded Groupon in 2008 as a deal-of-the-day website in Chicago, then helped to turn it into a global leader in e-commerce. He was inaugurated as the chief executive officer in August this year after successfully leading its mobile business. But as the original deal concept has slowed, Groupon has been changing into a global mobile commerce marketplace.

“Despite our success and progress throughout the world in all the countries we operate in, we have had very small and limited success in Korea,” said Lefkofsky. “There are two main reasons for this. The first is that we were late to enter this market, and the second is that companies like TMON are so well run and have done such a fantastic job that we have been unable to catch up.

“So, as they say in America at times, if you can’t beat them, join them.”

Although Asia accounts for 12 of Groupon’s 48 markets around the world, the region represents just 10 percent of the company’s sales.