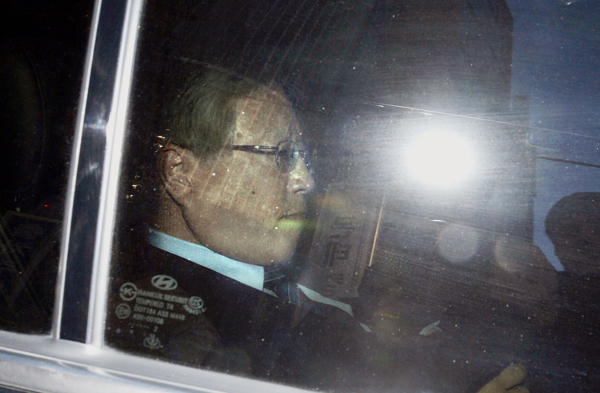 The reign of KT Chairman Lee Seok-chae that started in 2009 finally came to an end yesterday with him leaving a board of directors meeting at company headquarters in Seocho, southern Seoul, shortly after arriving.

Korea’s second-largest telecommunications company released a statement saying the board accepted his resignation.

It added that the company is now operating with an emergency management system under proxy Pyo Hyun-myung, the company’s CEO for telecom and convergence.

It said it will speed up the process of selecting a new CEO. To do so, it will hold another board meeting early next week and organize a CEO nomination committee.

The chairman left the company 50 minutes after the board meeting started at 2 p.m. He rushed to the car and sped off without taking questions from reporters.

However, according to the company’s statement, Lee reportedly told the board members he was gratified by the employees who had done their best under unfavorable conditions and thanked customers and shareholders for their support of the company.

“I will remember working with the people at KT as my life’s honor,” Lee reportedly said.

The official departure of Lee was much earlier than he initially had hoped. The KT chairman on Nov. 4 announced his resignation immediately after stepping off a plane from Rwanda as pressure from the prosecutors’ office continued to heighten.

The raids that took place during his trip to Africa finally forced the chairman to step down. However, in an email to employees, it was clear that he intended to remain on the job until a successor was determined.

“Until a decision is made on who will be the next CEO, I will try to get the remaining work done and help the next CEO lead KT under a new environment,” he wrote in the email.

But his decision to delay his departure didn’t seem to have been well received by high-ranking officials in the Park Geun-hye administration, which had has publicly displayed its discontent with the KT chairman by excluding him from the numerous overseas trips Park has taken.

Another raid by the prosecutors office on Saturday further pressured the KT chairman to leave.

Although the government has no shares in the company, it still has an indirect influence on the former government entity.

KT completely spun off as a private company in May 2002.

Lee, a former public servant who worked at the Blue House and was once information and telecommunications minister, was named CEO of KT in 2009, and just two months after he started work he was promoted to chairman.

Although the proxy CEO Pyo is expected to be one of the candidates vying for the top spot, there are already rumors that several close aides - including former government officials - of the Park administration will likely be candidates.

Meanwhile, the telecommunications company requested that the prosecutors’ office speed up its investigation.

“We ask that the investigation be concluded as soon as possible so that KT, a company which the majority shareholder is the public and 60,000 employees are working, can provide stable customer service and concentrate on our global market expansion,” the company said in its statement.