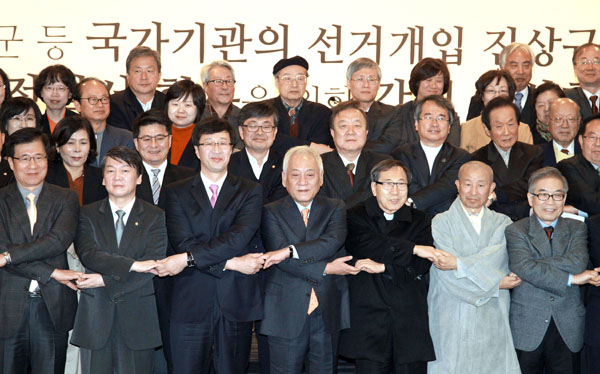 The largest opposition party yesterday joined hands with other liberal politicians, civic groups, scholars and religious leaders to launch a liberal alliance to challenge the Park Geun-hye administration in the Sejong Center for the Performing Arts in central Seoul. By Kim Hyung-soo

Leaders of the Democratic Party and the Justice Party, independent lawmaker Ahn Cheol-soo and about 100 leaders of civic groups, religious communities and academia yesterday attended a ceremony to launch a joint conference aimed at “laying bare the truth about the government agencies’ alleged intervention in last year’s presidential election and restoring the democratic, constitutional order.”

“Election interventions were committed by the Lee Myung-bak administration, but it became a matter of this administration when the Park government concealed the truth, defended responsible people and obstructed investigations,” DP Chairman Kim Han-gill said at the liberal group’s launch ceremony.

“The people can no longer trust the prosecution for its investigations into the presidential election scandals,” he said. “An independent counsel probe and a special National Assembly committee to reform the National Intelligence Service are the only way to lay bare the truth and prevent recurrences of similar incidents.”

While the former head and senior officials of the National Intelligence Service are currently on trial on charges of operating an illegal cyber smear campaign against Moon Jae-in, the Democratic Party candidate last year, more allegations have been made that the Cyber Warfare Command of the military, as well as other government offices, were engaged in similar activities on the eve of last December’s presidential election.

Over the past months, the ruling and opposition parties have been at war over how to handle those scandals and a related one over the transcript of a 2007 summit meeting, leading to legislative paralysis. The Democrats started a de facto political strike this week and are boycotting all legislative sessions until today, except for confirmation hearings.

Many members of the newly created conference were also part of an election alliance last year to unite the liberal voters against the Saenuri Party and its presidential candidate, Park. Representative Ahn is an addition to the liberal alliance.

Ahead of the joint conference’s launch, the Democratic Party also said it will cooperate with liberal lawmakers to appoint an independent counsel to investigate the scandals.

“We will work together with the Justice Party and independent lawmaker Ahn to jointly introduce an independent counsel bill,” Representative Chun Byung-hun, floor leader of the DP, said yesterday morning in a party meeting.

Chun said the people are frustrated to see the president trying to hide the government’s political interventions and defend the National Intelligence Service. Chun said Park must clearly state her position about an independent counsel probe and the formation of a special National Assembly committee to reform the spy agency before she addresses the legislature next Monday.

He also urged the Saenuri Party to cooperate with the group’s proposals.

The ruling party yesterday criticized the new alliance, calling it a challenge to the legitimacy of the presidential election.

At a party meeting yesterday morning, Representative Choi Kyung-hwan, floor leader of the Saenuri Party, said he was extremely disappointed to see the largest opposition party choose a new liberal alliance as its next step.

“If you look at the members, most of them were those who promoted an alliance between the Democratic Party and the Unified Progressive Party during elections last year,” said Choi. “The achievement of that alliance was failures in the general and presidential elections and the entry of pro-Pyongyang politicians such as Lee Seok-ki into the National Assembly to use the legislature as a bridgehead for revolution.”

The Unified Progressive Party is the third-largest party, with six lawmakers, and the Park administration is trying to legally dissolve it for its alleged ties with North Korea. Leaders of the UPP, including Representative Lee, have been charged with conspiring to overthrow the government.

“The Democratic Party must apologize to the public for its past liberal alliance and what came of it, instead of creating a new one,” Choi said. “The Saenuri Party wants to make clear that there will be no compromise with their demand for an independent counsel.”

Saenuri Secretary-General Hong Moon-jong criticized Representative Ahn for joining the alliance. “Ahn has always maintained an ambiguous position on sensitive political issues,” Hong said. “He is like an ephemeral mayfly that follows a beacon during an election period.”