Life is good for Pyongyang’s elite

Life is good for Pyongyang’s elite 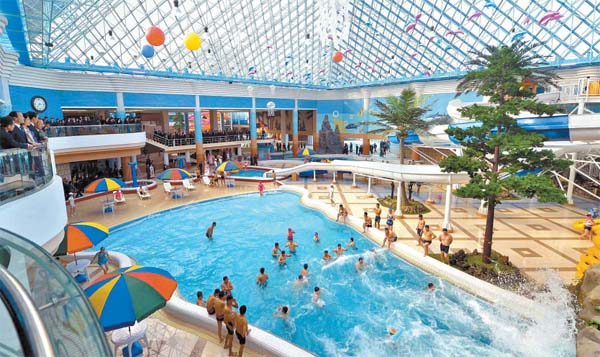 The gap in the standard of living between Pyongyang and other North Korean cities is widening under the Kim Jong-un regime, sources who recently visited the country told the JoongAng Ilbo.

In the past few months, the North Korean capital has experienced a veritable boom in cutting-edge technology, Western-style businesses and high-rise apartment buildings. And this newfound prosperity, observers speculate, is largely a bid by the country’s young leader to uphold support from the capital’s elite classes and increase revenue in the isolated nation’s political heart. On a visit to Pyongyang last week, one Korean businessman noticed significant changes on Changjong Street in the downtown area.

At Haemaji (Sunrise) Restaurant, foreigners and city residents alike were sitting there browsing the Internet on smartphones or tablet computers, he told the JoongAng Ilbo. “It was a scene just like any you would see in downtown Seoul,” the businessman said. “In Pyongyang, Western-style cafe culture is taking off.”

In fact, Kim Jong-un and his wife Ri Sol-ju recently visited the cafe, one of the waitresses told him. They enjoyed the popcorn, she said.

Similarly, another restaurant, which opened in May, lets its customers peruse the menu on tablet computers rather than on paper. Despite its high prices - a serving of bulgogi (Korean-style marinated beef) costs around $70 - the venue has proven popular with the wealthy class, most likely because of its embrace of modern technology.

“Under Kim Jong-un, business regulations .?.?. have been eased, triggering luxury markets targeted at the wealthy class,” said Lim Gang-taek, a researcher at the Korea Institute for National Unification. “Entertainment and amusement facilities are thriving as North Korean authorities try to increase the flow of U.S. dollars.”

An influx of newly-built apartments and an increase in the number of taxi cabs has also added to the reshaping of Pyongyang.

Previously, there were only 80 cabs in the Communist capital, said the businessman, but since Kim Jong-un’s inauguration, 1,000 have been mobilized. Those cabs provide 24-hour service, with fares starting at 500 North Korean won per kilometer ($3.75 per 0.6 miles) - more expensive than local buses, at 50 North Korean won.

But these changes mean little to the people who live outside of Pyongyang, where the oppression of a sickly economy and scarce resources is an everyday reality.

“Tensions are rising [in these areas],” said another businessman who visited North Korea recently. “Groups of three or more people have been banned from gathering.”

Authorities are also cracking down on those who watch South Korean dramas or video clips critical of the Kim Jong-un regime. Crackdowns are particularly acute in the border regions with China, the man added.

Things have gotten so bad in some areas, he said, that many people are increasingly turning to street markets - commonly known as “grasshopper markets” - to buy scarce goods. To avoid apprehension, vendors are constantly on the move, fleeing or staying out of sight when a crackdown might be imminent.

Some observers say this trend may only serve to strengthen anti-government feelings in North Korea’s greater reaches.

“Money and resources are limited,” said Cho Bong-hyun, a research fellow at the IBK Institute, “so Kim Jong-un has had to focus on taking care of the elite class in Pyongyang.”

Compared to daily life in the countryside, the wealth in the capital is painfully apparent, said a third Korean businessman.

When he visited Pyongyang, he said, he witnessed a military general drive up with his family to the Pothonggang Hotel in a Mercedes-Benz sedan. They dined on a multi-course meal, followed by drinks and shopping in the hotel’s duty-free shop. The businessman estimated that the cost of their dinner was around $400.

So far, the visitors agreed, it appears as though the regime has no intention of reining in its spending or its extravagant projects.

In July 2012, Kim Jong-un orchestrated the construction of the Rungna People’s Pleasure Ground in July 2012 - equipped with a so-called dolphinarium, a swimming pool and mini-golf course.

He also oversaw the construction of the Mirim Horse Riding Club, and the 10,000-square-meter Munsu Water Park, built at the behest of his late father Kim Jong-il.

Construction is also underway in Wonsan City on the 11-course Masikryong Ski Resort.