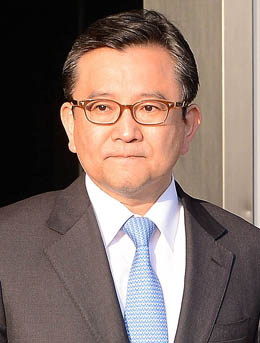 The Seoul Central District Prosecutors’ Office announced Monday that it will not file charges against Kim Hak-eui, a former vice justice minister suspected of being involved in a sex-for-influence scandal, citing a lack of hard evidence.

Yoon was indicted in August for bribing influential figures with sex-fueled parties at his villa in Wonju, Gangwon. However, according to the prosecution, he will face additional charges, including defamation and the unjustified execution of threats.

One of the most closely watched issues in this case was whether Kim was among the men exposed in videos that allegedly showed sexual encounters at private parties.

Chief Prosecutor Yoon Jae-pil said that “the video files proved to be an irrelevant source of evidence because the women questioned denied they were the women in the film.”

When asked if Kim appeared in the files, the prosecutor said it was “inappropriate to comment.”

The prosecution said that the women’s inconsistent testimonies and a lack of evidence ultimately led to its decision not to prosecute Kim.

“The women kept changing their testimonies, which made the statements inconsistent and unreliable,” prosecutor Yoon said. “Besides testimonies, we didn’t have any sound evidence to refer to.”

However, the police expressed concerns that the prosecution took a lax attitude toward the case against Kim, who once belonged to the law enforcement body.

“We considered the testimonies and phone call records to be sufficient grounds to prove the allegations,” said investigating officer Huh Young-bum.

After winding up their four-month investigation of the high-profile scandal, police handed over to the prosecution a long list of influential suspects who attended the sex parties. Along with the former vice justice minister, the list reportedly named current and former senior government officials, university professors and a former president of a university hospital.

“The investigation was tough because it happened a long time ago. But we tried to prove the case as much as we could,” said Commissioner General Lee Sung-han of the National Police Agency. “We’d like to wait and see. The women can appeal the decision if they believe the prosecutors’ decision as undue ruling.”

Kim resigned from his position at the Justice Ministry in March, just six days after he was appointed. Kim said he was stepping down because he could not perform his job in the midst of increasing allegations.

Kim denied any wrongdoing during the investigation and refused to appear before police for questioning four times, citing health reasons.