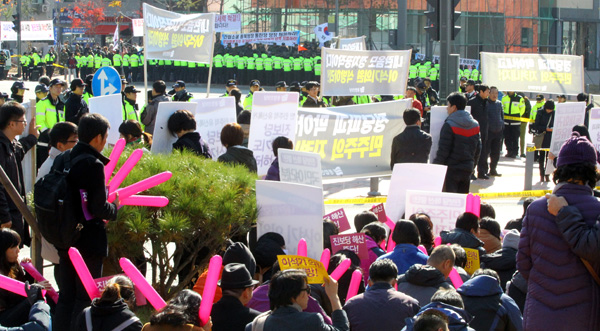 Before the first hearing in the trial of Representative Lee Seok-ki, a Unified Progressive Party lawmaker indicted on charges of plotting to overthrow the government, a group of leftist activists holds a rally demanding his release, while conservative activists stage a counter protest across the street. [NEWSIS]

The trial to decide the fate of Representative Lee Seok-ki, a troubled Unified Progressive Party lawmaker indicted on charges that he attempted to overthrow the government, commenced yesterday with the first hearing open to the public and the media.

Lee appeared in court dressed in a black suit along with his six other co-defendants, who are accused of the same charges, and his 23 attorneys, including UPP Chairwoman Lee Jung-hee.

During the hearing, the prosecution explained its charges against the defendants, arguing that they plotted a rebellion against the government, violated the National Security Law and were in possession of illegal documents and materials.

The prosecutors claimed that on May 12, Lee attended a meeting of the Revolutionary Organization (RO), a pro-Pyongyang underground group, at a building in Mapo District’s Hapjeong-dong, where he discussed with other group members plans for a rebellion.

Lee’s attorneys denied all of the suspicions against the seven UPP members. UPP Chairwoman Lee also claimed that a group like the RO does not exist and that any information about the group was false. There is no evidence, she stated, that RO members have a detailed schedule, purpose or timeline for an alleged riot.

One of the main issues to be resolved during the trial will be whether Lee and his co-defendants had an action plan for a riot, and whether it is regarded as an anti-government act.

In the last 30 minutes of the hearing, Lee was given a chance to speak.

“The premise of the prosecutors’ indictment was wrong,” Lee said. “I did not worry about North Korea, but [I did worry] that the United States could attack the North. This was the point of my speech at the May 12 meeting.”

Lee claimed that the purpose of the May 12 meeting was just to vent frustrations about the current government. He said the trial itself was “absurd,” and added that he hoped the “scarlet letter” imprinted on him and the UPP could be erased.

During court proceedings, several North Korean defectors in attendance cursed the defendants, shouting “Send them to North Korea!” and “If we don’t execute them, the country would collapse!” It’s been 33 years since an incumbent lawmaker stood on trial on suspicion of staging an anti-government rebellion. The court will hold a total of 11 hearings this month, which includes the first hearing held yesterday. The verdict could be announced as early as the end of this year.

About 200 members of far-right civic organizations and a group of North Korean defectors staged a rally in front of the Suwon District Court before the trial began yesterday, shouting “Disband the UPP!” and “Punish Lee Seok-ki!” On the opposite side, nearly 150 UPP members also staged a sit-in protest, chanting “Stop disbanding the UPP!” and “Release Representative Lee Seok-ki!”

To prevent possible clashes between the two groups, about 830 police officers were dispatched inside and outside the court, though no severe scuffles occurred.

The court distributed 26 tickets to watch the first hearing of the trial, which were given out on a first-come-first-served basis. The far-right activists and defectors, who had been squatting in front of the court since Saturday, ultimately had the advantage. Although some UPP members were also camped out near the court, all the available seats ended up going to 26 of the North Korean defectors, who had arrived over the weekend.

Due to such heated competition for tickets, the court announced yesterday a change in regulations. Starting with the second hearing today, a lottery system will be implemented.