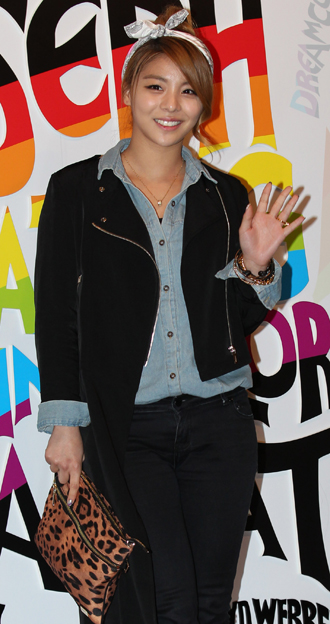 The singer Ailee, who suffered embarrassment due to the release of several naked photos of her this week, came back to Korea yesterday from Japan after completing promotional work.

She appeared at Incheon Airport wearing a hat and a pair of sunglasses, apparently trying to avoid too much attention. She moved quickly to her car and left the airport. On the way out she bowed to some fans who had been waiting to see her at the airport, but she did not make any official comment or answer questions from reporters.

Ailee’s agency, YMC Entertainment, said in a statement on Monday that the photos had been taken in the United States before she made her debut in Korea, and blamed an ex-boyfriend and American-based K-pop website for publishing them. The agency is now focusing on finding the first person who released the photos online.

Ailee, who is seeking to expand her popularity overseas, released her Japanese debut mini-album “Heaven” on Nov. 6. She held promotional events in Sapporo, Osaka, Nagoya, Tokyo and other cities in Japan.