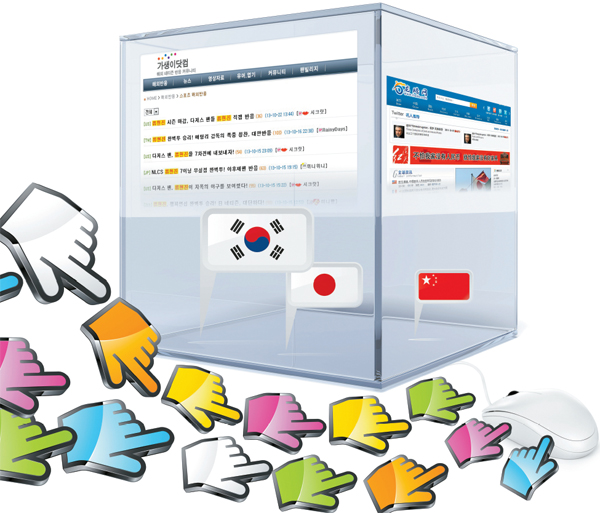 On Oct. 15, Ryu Hyun-jin of the Los Angeles Dodgers led his team to a 3-0 victory over the St. Louis Cardinals in the National League Championship Series, scattering three hits over seven innings. With his effort, Ryu became the first Korean pitcher to win a league championship series game.

But soon after, Ryu’s name topped search engines for a reason that had nothing to do with baseball. After the game, the most frequently searched keywords on various portal websites in Korea were “Ryu Hyun-jin reaction from abroad,” and “American responses toward Ryu Hyun-jin,” among others.

On gasengi.com - a website that compiles foreigner responses to Korean issues - more than 20,000 Koreans were trying to glean American reactions to Ryu’s success, which eventually crashed the server.

A second case in point is centered on another Hallyu sensation.

But more so than the song itself, the most popular keywords on Korean portal Web sites again were something along the lines of “Gentleman feedback from abroad.”

Rather than the lyrics, the dance and the like, Koreans were more curious about how “others” were evaluating their Hallyu star.

One of the most viewed search results for “Responses to Psy” comes in the form of a Harvard University Facebook post in which it was announced that the Korean singer would be giving a lecture back in May.

The comments were translated into Korean for netizens and range from “What is he going to talk about?,” “Somebody at Harvard has lost it” to one Korean national even questioning other responses “… is it really because he is nothing but a pop star, or is it the hate against Asians?” Screen captures of the thread were circulated on various Korean portal websites.

Another thread found on gasengi.com introduces a blog post in Japan in which the writer said that in Korea, if you set your friends up on a blind date (called sogaeting) and the couple ties the knot, you are recompensed with a designer handbag.

The replies that were in Japanese were translated into Korean and show an array of views from, “I wonder if the bag means that as long as someone finds you your mate for life, that nothing is too great to reward them with,” to “In Korea, a person’s specs is very important.”

There are threads about anything and everything, all translated into Korean, which leads to the question: why?

But it’s not just in Korea that this phenomenon of heeding what “others” think about “me” and “us” is burgeoning.

In China and Japan, too, “foreigner response,” or “feedback from abroad” are some of the most frequent search terms concerning issues at home. Consequently, there are websites that deal exclusively in aggregating feedback from abroad. And this isn’t just in the realms of sports and entertainment.

In Korea there are two representative websites: gasengi.com and gaesomun.com.

There are also about 10 sites that dabble mostly in foreigner responses to Hallyu news.

It’s not just the opinions of foreign media or specialists that captivate Korean netizens. On YouTube, there are countless “responses” to K-pop music videos, gauging the reactions of average American viewers. At times, these reviews are lumped together with mentions of K-pop entertainers by the U.S. media and distributed as press releases by agencies in Korea.

There is a demand for such news, and gasengi.com in particular generates as much traffic as the websites of official media networks. Within the site, there are pages dedicated to politics, economy, society and culture.

Users are able to view responses from abroad as soon as news breaks. Of interest recently in the politics sector was the export of fighter jets (FA-50) to the Philippines. Koreans were interested in the “Filipino response” to the deal struck between the two countries; there were about 30,000 threads concerning the topic.

Others wanted to know how the Chinese responded to the matter.

Website operator Lee Sang-ho, 42, said he has 10 part-time translators who are fluent in English, Chinese, Japanese and other languages.

“In addition to language skills, it’s important that they have knowledge in the area they are translating,” said Lee, who emphasized the use of translations that tell the whole story in a coherent, contextual matter over “literal translations.”

An American teenager responds to a G-Dragon video on YouTube. Screen capture

The need for self-assurance

In the West, it’s hard to find websites that specialize in foreign responses from other countries. This phenomenon is reserved to Korea, China and Japan.

In China, ltaaa.com deals specifically in foreign responses and covers a wide spectrum of subjects. It reports feedback not only from Korea, Japan and the United States, but also India, Turkey, Saudi Arabia and Israel, to name a few.

Meanwhile on baidu.com, China’s biggest portal website, there are many pages that delve into foreign responses to Chinese news.

In Japan, there isn’t a specific site concerning responses from abroad, but some sites like 2ch.net, a right-wing community forum, include responses from Koreans, Chinese and the like.

As Japanese media companies are less likely to allow user comments on their content, Yahoo! Japan plays an instrumental role by letting users anonymously post foreign responses that they’ve found or have translated.

In Korea, the phenomenon began in 2005 with the opening of gaesomun.com. In regards to the comical name, which translates into “dog rumor” by playing on the prefix “gae” (dog), the website’s founder and IT columnist Ahn Jin-hong said that it was the second-best option available.

“I wanted to call it somun [rumor].com, but it was taken so we went with adding the prefix ‘gae’ [which means dog and turns the word into a mild swear word], which was popular at the time,” explained Ahn.

Meanwhile, gasengi.com, which surfaced in 2010, plays on the word “border.”

Lee said he chose gasengi, which means “edge” or “border” in the Chungcheong dialect. It also has a meaning behind it: “to move from the edge to the center,” said Lee.

Such sites are on the rise in Korea, China and Japan, which may be best explained by looking at the nations’ communal culture.

Yoon In-jin, a professor of sociology at Korea University, said that the reason why Asian nations have failed to create a self-sustainable growth model based on their own traditions may be linked to the phenomenon.

“These nations were busy imitating European and North American ways and that’s how they’ve managed to grow,” said Yoon. “But as a result, they now examine themselves through a Western gaze, and after a while this judgment has become a part of their identity.”

Developed by French psychoanalyst Jacques Lacan, the theory stems from the behavior of infants recognizing themselves in a mirror and identifying themselves through it as they relate to the world. The theory is also tied to “social referencing,” which explains the desire to get approval from others.

“The need to be affirmed by others and identity are linked,” Yoon said. “People often relate to entertainers and sportsmen on the global scene and are thus interested in how they are viewed by the rest of the world.”

This preoccupation with how “others” view “us” can also be attributed to the prevailing cultural orientation. Yoon Byung-nam, a history professor at Sogang University, said that the three Asian nations are united in their collectivist nature.

“Korea and Japan are single-race nations and while China isn’t, the socialist nation is fixated with putting the state first, and community interest comes first there,” said Yoon, adding that this defensive reaction was a byproduct of nationalism combined with technological advances.

Sometimes this fixation with others’ evaluation of Korean issues upsets netizens, at times starting verbal arguments with those from other nations.

Oftentimes the original sources (those giving the foreigner feedback) are bloggers and not exactly fair and balanced media specialists; it’s possible for feedback to be peppered with criticism and personal bias. This often starts a netizen war, with Koreans giving the “foreigners” some feedback of their own, and a vicious cycle ensues.

“Nationalism by nature alienates foreign powers. No matter what others say, nationalism by definition puts its own culture as first,” said Yoon. And although he said that nationalist users are quick to profess their own biased sentiments, at the heart of such behavior lies the notion of anxiety and jealousy, “a sort of toadyism can be seen.”

Son Tae-gyu, a journalism professor at Dankook University, said that such mentality leads to misinterpretation, or even fabrication.

“In the U.S., if someone said that a Korean player was ‘great,’ then it just means that they are performing well. But by the time this news gets to Korea, local media will say that the player was dubbed ‘mighty’ by the Americans,” said Son. He added that this wasn’t exactly a glitch in translation, but that local media and netizens now abide by this rule of exaggeration.

“Being so sensitive to foreign responses, and to take facts and stretch it to such extremes is a pathological phenomenon. It’s almost childish that people crave the affirmation of ‘others’ so much,” he said.