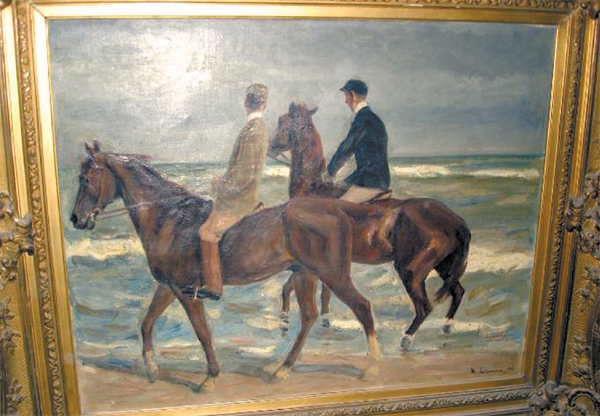 “Reiter am Strand,” or “Riders at the Beach,” by German artist Max Liebermann from 1901 was among the more than 1,400 artworks that were seized by German authorities in an apartment in Munich in February 2012. [AP/STAATSANWALTSCHAFT AUGSBURG]

Authorities posted 25 paintings from the more than 1,400 paintings, drawings and other works discovered in the apartment of 80-year-old Cornelius Gurlitt, the son of a dealer who worked with the Nazis. But the website - www.lostart.de - was overwhelmed by interest, according to Sabine Kramer from the government-run Lost Art Internet Database.

“There are simply too many people who want to look at the pictures and that’s why we’re facing technical problems,” Kramer said.

As German officials scrambled to respond to criticism that they have been slow to make details public, several families came forward to stake their claims. Among them were the heirs of Fritz Salo Glaser, a Jewish lawyer from Dresden, who a lawyer says owned 13 of the 25 paintings listed online.

Officials had initially released few details about what was found in Gurlitt’s apartment in part of an ongoing tax investigation, but the haul was known to have included works by Henri Matisse, Pablo Picasso and others. Bowing to demands to release more information, the government said Monday it believes about 590 of the more than 1,400 artworks may have been stolen by the Nazis.

It said the website would be regularly updated so people and institutions could tell if they had legitimate claims, but declined to give a time frame for the publication of the other artworks in question. The government also said a task force made up of six experts started working Tuesday on identifying possible former owners.

Looted art was stolen or bought for a pittance from Jewish collectors who were forced to sell under duress during the Third Reich. For the heirs of those collectors, the discovery has raised hopes, while the slow release of information has stirred frustration.

On Tuesday, Jewish groups and art experts welcomed the publication of the 25 paintings, but demanded that the rest be made public quickly.

“It’s an important signal that the government intervened after the outrage about the silence surrounding the looted art,” said Deidre Berger from the American Jewish Committee in Berlin.

“But it’s too little, too late. If the government is serious about this, they should get the information up in a way that everybody can access it - people worldwide have a legitimate interest in this.”