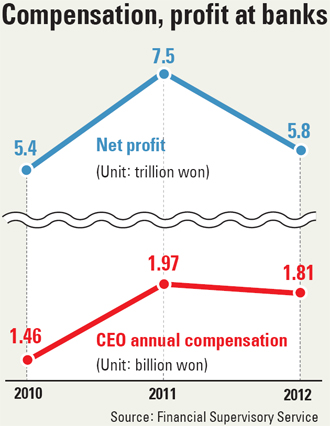 While much attention has been given to exactly how much the heads of financial institutions are paid, a study by the country’s financial regulator shows that average annual compensation for the highest-paid 28 executives is 2.1 billion won ($1.96 million).

The FSS study was conducted after the regulator announced in June that it would look into the wage and compensation systems of financial institutions in response to criticism that executives were receiving excessive compensation at a time of declining profits due to the bad economy and low interest rates. Local financial institutions have struggled to find new revenue streams, especially in the saturated local market.

The official added that financial companies set their own performance-based wage systems and they tend to set their return-on-asset and earnings per share targets lower than the previous year so their chief executives are guaranteed at least 70 percent to 80 percent of what they received the previous year - even when profits fall.

“In principle, financial institutions get to voluntarily decide their own performance-based compensation system,” he said. “But we plan to continuously look into their systems so that the amount financial chiefs receive is rational.”