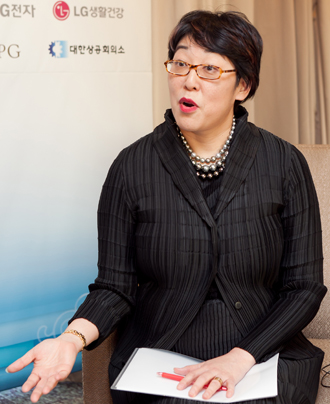 Companies that are ethical and comply with the law end up lasting longer and doing more for the society, said Royanne Doi, corporate chief ethics officer at Prudential Financial.

In an interview with the Korea JoongAng Daily on Tuesday, Doi shared her belief that it is her role to help not only employees but also people around the world - potential customers - make better life decisions.

She was referring to the destruction in world markets left in the wake of the subprime mortgage crisis five years ago.

“What I would say for Korea and for Asia in general is that corruption is not free and what we know about bad ethics is that there’s sometimes a price that a country has to pay,” she said. “Corruption costs us a lot. When there’s more trust in the economy, there’s more economic activity.”

Doi, vice president at Prudential Financial, was in town this week to attend the two-day Global CSR Conference organized jointly by the United Nations Global Compact Korea Network and the Ethics and Compliance Officer Association that ended yesterday. She spoke at the conference and shared what her company does in practical ways to carry out social corporate responsibility and maintain corporate ethical behavior.

Although the position of an ethics officer is somewhat new in the business realm, Doi expects the title to gain more currency in coming years.

“Being a chief ethics officer exclusively without anything else is somewhat new,” she said. In the past, a similar position would be a chief compliance officer or a business ethics officer. In Asia, the trend is that ethics tends to be handled from the legal side.

“Ethics is more about people’s hearts and feelings and how they choose to live their lives,” she said, “and how they make their decisions.”

Doi expressed optimism that the importance of her role in companies will only grow, especially after companies around the world suffered from the global financial crisis.

“There are some people who would say that corruption and good ethics come in cycles - so we do better, and then we have a scandal, and so on,” Doi said. “But I do believe that there are moments in our history where big things happen and they can be defining moments, an opportunity for big transformational change.”

She believes that the only way to take the world to the next level is to get to the hearts and minds of the people, and “that’s not compliance but ethics.”

Apart from her role, Doi noted the direction of her company’s corporate social responsibility activities.