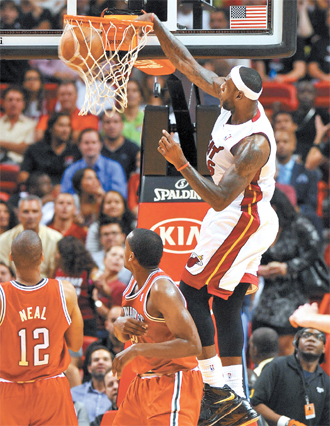 MIAMI - The defensive effort was closer to Miami Heat standards. LeBron James made it difficult to notice anything but offense.

James scored 33 points on 13 for 21 shooting - with an array of post-up moves getting him going early, then a barrage of 3-pointers fueling a big third-quarter push - and the Heat encountered little trouble on the way to a 118-95 win over the Milwaukee Bucks on Tuesday night.

James scored 17 points in the third quarter, his best 12-minute stretch of the season and an indicator that a balky back that slowed him in the season’s first couple weeks is improving.

“It’s getting better,” James said. “It feels a lot better. Still a little sore .?.?. getting a lot of work put on it so I can get to 100 percent. But it’s getting better everyday and that’s a good thing.”

Michael Beasley scored 19 points and Mario Chalmers finished with 15 points and seven assists for the Heat, whose biggest victory margin before Tuesday was a 12-point triumph over Chicago on opening night. Chris Bosh scored 10 for Miami (5-3).

“It wasn’t perfect,” said Heat coach Erik Spoelstra, whose team was coming off a final-second loss to Boston on Saturday. “There were still some areas we definitely need to improve on, in terms of the details and discipline. But at least the effort and the activity was better, the disposition right from the beginning and it carried through once we got into the rotation. Guys were much more focused and bringing that competitive spirit.”

John Henson and Gary Neal each scored 18 points and Giannis Antetokounmpo scored 11 for Milwaukee - all of them putting up those points off the Bucks’ bench. Caron Butler was the only double-digit-scoring starter for the Bucks (2-4), finishing with 10.

“They shot almost 60 percent today, so there’s no way we can win a game like that,” Henson said. “We just have to get better.”

The Heat have scored at least 100 points in each of their eight games, extending the team’s franchise-record for such a start, but what carried much more significance in the collective eyes of the two-time defending NBA champions were the defensive numbers.

Milwaukee shot only 35 percent in the first three quarters, before scoring 33 points against an array of what largely was Heat second- and third-teamers in the final 12 minutes.

“It’s been a long 48 hours in this building, but at least we were able to respond with a better game,” Spoelstra said. “And I think our guys felt better looking each other in the eye in the locker room tonight.”

James gave the Heat a shot of adrenaline late in the half, when he and Chalmers teamed up for yet another entry on Miami’s alley-oop highlight reel. Dwyane Wade grabbed a deflected ball and got it to Chalmers, who drove down the lane against Milwaukee’s Khris Middleton - then simply lofted the ball straight up, knowing James was trailing the play. James soared past Middleton for the dunk, the Heat took a 56-45 lead into the half, and the league’s four-time MVP then took over in the third quarter. James 17, Bucks 17 - that was the score in the third quarter, after the Heat star made 6 of 9 shots in the period, including four 3-pointers. The 84-62 lead that Miami carried into the fourth ensured he would get the rest of the night off after logging only 30 minutes. AP