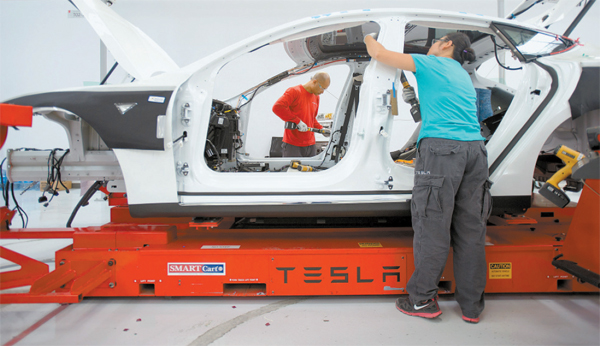 Tesla Motors co-founder Elon Musk says “there’s definitely not going to be a recall” of the company’s Model S sedan. Ultimately, it’s not up to him.

U.S. regulators’ decision on whether to start a defect investigation, which can lead to a recall, will depend on whether they see three fires in five weeks as freak occurrences or evidence of a design flaw in the plug-in car.

“There’s no Pinto moment here,” said Dan Edmunds, director of vehicle testing at Edmunds.com, an automotive information website based in Santa Monica, California, referring to the Ford Motor car recalled in the 1970s after deadly gasoline fires. “They may look at it and say it’s actually not that bad.”

A fire erupted in a Model S in Tennessee last week after its owner said he ran over a trailer hitch loose in the road at 70 miles (113 kilometers) per hour. The circumstances resembled an Oct. 1 incident in Washington state in which a car struck a piece of metal. Another fire occurred after a crash in Mexico that was reported Oct. 18.

Tesla closed at $137.80 Tuesday, down 29 percent since the first fire was reported. The stock gained more than fivefold this year through Sept. 30, when it reached a record closing price of $193.37.

The National Highway Traffic Safety Administration said Oct. 24 it found no evidence the first fire resulted from defects or violations of U.S. safety standards. That came two months after the Model S received the top five-star rating in each category of the agency’s crash tests.

“We literally are in constant contact with them,” Musk said of regulators.

“NHTSA has real problems to deal with where people die or are seriously injured. Their time is preoccupied with that, not with fictional issues created by the media.”

NHTSA hasn’t discussed the Tennessee fire beyond a Nov. 8 statement in which it said it’s in close communication with the company and local authorities, gathering information about the incident to determine if additional action is necessary.

In a defect investigation, officials would look at how frequently Tesla fires were occurring compared to other vehicles, whether they were happening under predictable road conditions, and whether crashes were leading to unusual numbers of fatalities or injuries.

Agency investigators must weigh whether a part is failing under reasonably foreseeable driving circumstances, and whether the failure is safety-related, said Allan Kam, a former senior enforcement attorney with NHTSA.

Musk defended the Model S’s safety record yesterday at the New York Times’ Dealbook conference in New York, saying the sedan is “five times less likely” to have a fire than a gasoline-powered car.

While the Model S has proven excellent in protecting passengers, NHTSA “absolutely has to investigate” because it appears the metal shielding on the car’s undercarriage can’t prevent road debris from penetrating its lithium-ion battery packs, Clarence Ditlow, executive director of the Washington- based Center for Auto Safety, said Nov. 7.

NHTSA has investigated fires in two other electric cars, the hybrid-electric General Motors’ Chevrolet Volt and the Fisker Automotive’s Karma plug-in. The Karma was recalled and GM voluntarily reinforced the battery packs on Volts, after one caught fire following a NHTSA crash test.

Fires in gasoline-powered cars have led to some of NHTSA’s biggest defect investigations. Earlier this year, the agency and Chrysler Group clashed over fixing 2.7 million Jeep Grand Cherokees because their gasoline tanks can leak in a crash. The agency says 51 people have died in post-crash fires.

Chrysler initially challenged a government-requested recall, which would have set up a rare public hearing and court case, before agreeing to a “voluntary campaign” to provide more protection in rear-end collisions.

Consumer Reports gave the Model S one of its highest ratings ever based on its test drives and reliability data reported by more than 600 owners, said Jake Fisher, the magazine’s director of automotive testing. None of the surveyed owners reported battery performance issues, including fires, Fisher said.

The owner of the Model S that burned in Tennessee, Juris Shibayama, posted a first-person account of the crash on Tesla’s website Nov. 9. He described seeing a truck in front of him driving over a “rusty three-pronged trailer hitch” sticking up with the ball up in the air.

“I felt a firm thud as the hitch struck the bottom of the car, and it felt as though it even lifted the car up in the air,” Shibayama wrote.

The car messaged to Shibayama to pull over and said that the vehicle would be shutting down. He got to the shoulder safely. Smoke started to appear under the car within 10 seconds of getting out it, and it caught on fire about two minutes later, he said.

The experience hasn’t shaken Shibayama’s faith in Tesla. He said he still thinks of the brand as safe and he would “buy another one in a heartbeat.”

If the more recent crash involved a large object that would have damaged any conventional car, NHTSA may decide there’s no design flaw, Fisher said.

The Model S earned five-star ratings on the agency’s crash tests, which involve striking a flat barrier with the front of the car at 30 miles per hour. The agency doesn’t have a test for assessing the strength of Tesla’s battery shield.

The agency doesn’t have a history of forcing expensive recalls, said Sean Kane, president of Safety Research & Strategies, a Rehoboth, Massachusetts-based company that consults on automotive issues for attorneys and advocates for tougher regulations.

“If I’m Tesla, the least of my fears is NHTSA,” Kane said. “The bigger fears are Wall Street and consumers.”