Job seekers study a bulletin board at a job fair in Busan earlier this month. The government has been hoping to increase employment opportunities through an improved part-time job system. [NEWS1]

The public sector will make a major push to increase high-level part-time jobs next year, said the Ministry of Employment and Labor and the Ministry of Strategy and Finance yesterday, despite concerns about discrimination against irregular workers, which runs deep in the public world.

At a ministerial meeting on economic affairs, Deputy Prime Minister for the Economy Hyun Oh-seok and other ministers unveiled a detailed plan to expand part-time jobs in the government, a policy announced in June.

“The public sector, consisting of government officials, teachers and public institution employees, will lead the way in establishing the selective working-hour system and expanding the creation of such jobs in the private sector,” Hyun said. “The government will ensure the fair treatment of those part-time workers and evaluate public institutions more closely regarding their employment.”

The government will first revise labor laws to allow the hiring of part-time government officials and teachers at public schools.

Next year alone, it aims to fill 20 percent of all entry-level government positions with part-time workers.

Part-time government officials will be allowed to hold more than one job and will be able to receive the same pension benefits as regular workers, the related ministries said.

Public institutions will hire 9,000 part-time employees over that same period.

Each institute will revise its own rules for personnel and welfare so that part-time employees won’t find them discriminatory, the Finance Ministry said.

Institutions in the provinces will also hire part-time employees, the Ministry of Security and Public Administration said.

However, yesterday’s plan didn’t specify part-time workers’ job descriptions or treatments, including wages and welfare benefits, sparking some backlash from the trade union of government officials.

“We are strongly opposed to the selective working-hour system, since it is not fair to increase the number of irregular workers within the public sector,” said Yun Seong-mun, a member of the Korean Government Employees’ Union. 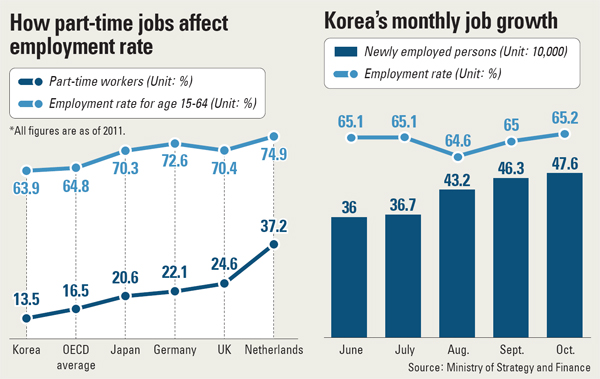 Yun said the government has been hiring irregular workers to make up for retired regular workers or those on leave instead of adding regular positions because of the costs.

“Discrimination against irregular workers runs deep in the public world. Even technicians hired as government officials are facing unfair treatment,” Yun said. “It will be more severe for those part-time workers.”

Meanwhile, the growth of newly employed people surpassed 400,000 for the third straight month in October year-on-year, a sign of the improving labor market, according to data released by Statistics Korea yesterday.

The government agency said in a report that the number of Koreans who found jobs last month climbed 476,000 from a year earlier, largely owing to increasing employment for those in their 50s and women.

There were 187,000 newly employed women workers in October.

The total employment rate for those aged between 15 and 64 stood at 65.2 percent - that’s up 0.6 percent from the same month last year, but far behind the government’s goal of 70 percent.

However, those in their 20s still struggled to find jobs last month. The number of young people who found jobs rose 32,000, down from 38,000 in September.

After mentioning the slowly improving job market, Minister Hyun said the government will front-load an additional 1.5 trillion won ($1.40 billion) from the budget for the public sector in order to accelerate the economic recovery by the end of the year.

“We are at a watershed moment of making a turnaround into a full-fledged recovery or sliding back into recession after a brief improvement,” Hyun said.