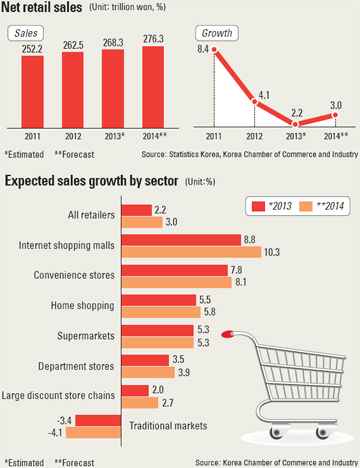 The domestic retail market, which has been struggling this year, is expected to improve slightly next year, according to the Korea Chamber of Commerce and Industry (KCCI) yesterday.

However, growth is expected to vary by sector, with Internet shopping malls predicted to post double-digit expansion and traditional markets contracting.

The domestic retail market has rapidly shrunk after posting 8.4 percent growth in 2011. Estimated growth this year is 2.2 percent.

The survey is based on net retail sales, excluding vehicle fuel.

Internet shopping malls were the only retail sector expected to post the largest growth of 10.3 percent - double digit growth - according to the KCCI.

Convenience stores are forecast to post 8.1 percent growth, followed by home shopping (5.8 percent), supermarkets (5.3 percent), department stores (3.9 percent) and large discount store chains (2.7 percent), all of which are higher than this year.

On the other hand, traditional markets are expected to shrink by 4.1 percent.

This year, the number of smartphone users has exceeded 32 million and the mobile commerce market is projected to continue its growth next year.

For convenience stores, despite the difficulties in opening new stores due to market saturation, the KCCI said the trend of buying fast food and making purchases in small amounts is likely to drive strong growth.

In addition, the continuing development of private brand products and the diversification of convenience stores should lure more customers.

Meanwhile, traditional markets will continue to suffer from a lack of convenient facilities such as parking. The strengthened delivery services of large discount store chains and supermarkets, changes in the consumption patterns of consumers and a weak response to changing conditions were also cited by the KCCI as reasons for negative growth.

“Quantitative growth slowed in 2013 due to shrinking consumption. It was a year that laid the cornerstone for a qualitative restructuring of the domestic retail industry, thanks to mutual cooperation between large and small retailers, fair trade and the rapid growth of new retail sectors, such as mobile shopping,” said Kim Kyung-jong, head of the distribution and logistics agency of the KCCI.