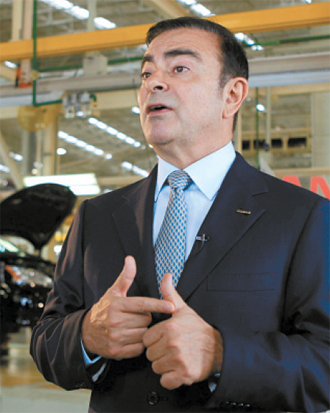 Nissan Motor is accelerating operations in Mexico to produce 1 million vehicles annually within three years, putting the country on par with Japan as an export hub for the carmaker.

About 700,000 of that total will be exported to the United States, Canada and South America, said Nissan Chief Executive Officer Carlos Ghosn.

“Exports of 700,000 from one country is going to probably make Mexico as important as Japan in terms of export of cars for Nissan,” Ghosn said Tuesday. “Mexico is a very competitive country.”

Nissan, already the biggest automaker in Mexico, opened a $2 billion plant that will be its third in the Latin American nation. Ghosn this month announced an overhaul of the company’s management as he aims for an 8 percent operating profit margin by the year ending March 30, 2017, after the GT-R and Maxima maker cut its annual profit forecast by 15 percent.

The new factory, in Aguascalientes, will initially produce Sentra small cars and is designed to build as many as four models per assembly line. Nissan declined to say what else will be built there.

Japan’s second-biggest automaker also operates another plant in Aguascalientes, about 300 miles northwest of Mexico City, and one in Cuernavaca, about 40 miles south of the capital.

Under Ghosn, Nissan’s production capacity in Mexico has surged to supply the domestic market as well as take advantage of lower costs and trade agreements to export vehicles.

The company is the country’s domestic sales leader, according to the Mexican Automobile Industry Association. It built 584,880 vehicles in Mexico in the first 10 months of the year, 23 percent of the nation’s automobile production and more than any other manufacturer, according to the auto industry group known as AMIA. Nissan’s output in Mexico last year totaled 683,520. “By the end of 2016, the plan is 1 million cars out of Mexico,” Ghosn said in a Bloomberg Television interview. “This new plant will allow us to continue our offensive on the Mexican market, and to be able to support the U.S. operation.”

The maker of Pathfinder SUVs and Leaf electric cars this month cut its full-year profit forecast on slower sales in some emerging markets and a recall of 910,000 vehicles.

Nissan has said it’s spending more than $5 billion to expand capacity in the U.S., Mexico and Brazil. The new Aguascalientes plant employs 3,000 people and has initial capacity to make 175,000 vehicles a year, Nissan said. That will bring the company’s total Mexican capacity to about 850,000.

The owner of the Infiniti and Datsun brands built the new Aguascalientes plant in 19 months. It has also attracted suppliers to the Mexican city, where billboards advertise upscale homes in Japanese and Spanish.

The new factory has stamping, body, paint, injection and bumper-paint, as well as assembly operations. It’s situated on 1,137 acres (460 hectares), 2.5 times the land are of Nissan’s first factory in Aguascalientes, according to the company. Nissan could expand into empty land around the plant.

The Nissan plant helps “consolidate us as a country that has important strengths in the automobile sector,” Mexican President Enrique Pena Nieto said in a speech at the factory opening. “We’re making the necessary adjustments for more investment to come to our country, both domestic and foreign.”

The nation’s auto output climbed to 2.51 million vehicles during the first 10 months of the year, up 3 percent from the same period a year earlier, according to AMIA. Production climbed 13 percent year last year.